MEEKER — Northwest Auto’s days as a General Motors dealership are numbered.
Like other dealerships in Colorado and around the country, owner Doug Overton received a letter informing him his contract with GM would not be renewed. 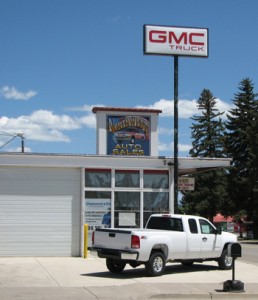 “They’re not going to renew my contract in October of 2010,” Overton said, who, along with partner Bill Bibb, bought the dealership in 2002.
After the contract with GM expires, Northwest Auto — which is Rio Blanco County’s only new-car dealership — will continue to sell used vehicles and do service work.
“That’s our plan right now,” Overton said.
With all of the news about the financial troubles of American automakers, including GM, Overton knew his dealership might be affected. But, still, even when GM seemed headed for bankruptcy, which it filed for June 1, Overton remained confident he would survive the cut.
“Because, the criteria they said they were going to use, all of the quality scores that were going to determine (which dealerships were closed), we were in the top percentile,” Overton said. “But what they did, anybody that didn’t sell 50 new vehicles a year, they didn’t look at anything else. They just dumped ’em.”
Northwest Auto didn’t miss the 50-new-vehicles-sold threshold by much.
“I missed it by a few vehicles, not very many,” Overton said. “So, had I done that, we would’ve had a better chance, because all of the other scores were way up there. I was really hoping we’d make the cut, but we didn’t.”
Northwest Auto, historically, has sold more used vehicles than new vehicles.
“Oh, yeah, we always have,” Overton said. “We sold (more used vs. new) by two- to three-to-one.”
Even though Overton knew it was a possibility GM would cancel its contract with Northwest Auto, when he received the official news, which came in a letter earlier this month, it stung.
“I’m very hurt and disappointed,” Overton said.
But it made him appreciate even more the customers who had bought vehicles from Northwest Auto.
“I really appreciate the people who did buy from us, and we’re going to do our darnedest to keep their business and take care of ’em,” Overton said. “Even when after we’re not a dealer, we’ll take care of ’em. They’re our customers. Their loyalty to us … we’ll return the favor.”
Overton noted White River Electric Association as an example of customer loyalty.
“The WREA really supported us as a dealership,” Overton said. “They’re probably the best entity, of all the entities around here, as far as they shop locally better than any of the others. We really appreciate those guys.”
As is common in this part of the country, most of the vehicles sold by Northwest Auto are trucks and sports utility vehicles.
“It’s all trucks, trucks and SUVs,” Overton said. “We have a hard time with cars.”
Besides selling used vehicles, Northwest Auto will continue to do service work.
“We have always worked on all makes and models, and we’ll continue to do that,” Overton said. “We do a lot of Ford work. We’re pretty tight with Ford. We have all of the diagnostic equipment and tools to work on ’em. We stock almost as many Ford parts as we do General Motors.”
However, once the contract with GM expires, Northwest Auto will no longer be able to do warranty work on vehicles.
“I think it’s going to be a huge inconvenience for people to take their vehicles (out of town to have warranty work done),” Overton said. “After 2010, we won’t be able to do warranty work, if we aren’t a dealership. Even the people who weren’t loyal, and who didn’t buy from me, were bringing their vehicles here to have their warranty work done.”
Northwest Auto also does the service work for Colowyo Mine’s fleet of vehicles.
“We have a contract with them,” Overton said. “We do everything on all of their small vehicles.”
While Overton is disappointed about losing the GM dealership, he also questions the government’s involvement in taking over majority ownership of the carmaker.
“I really have an uneasy feeling about the government getting their nose in this stuff,” Overton said. “I’m really scared about what’s going to happen. I would’ve felt a lot better letting things take their normal course, rather than the government getting involved. I’m afraid we’ll pay for that for years.
“You know, politicians now, they think we’re dumb,” Overton said. “They think they can tell us what’s good for us, and expect us to swallow it.”
Overton said he sent a follow-up e-mail to GM, expressing his displeasure with the decision to not renew the dealership contract, but he hadn’t received a response, and he didn’t expect one.
“Oh, yeah, I sent a letter, asking them to reconsider,” Overton said. “I knew it was futile, but I had to do it. The last stuff I got from them pretty much said (the decision) was final.”
Asked if he thought Rio Blanco County could support a dealership, Overton said simply, “They did.”

Carson and Barnes Circus, one of the last of the great American traveling big top circuses, will perform two shows, at 4:30 p.m. and 7:30 p.m., in Meeker at the Rio Blanco County Fairgrounds