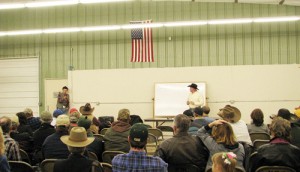 A Dec. 20, 2012 notice from Kent Walter, field manager of the Bureau of Land Management White River Field Office, sent to all BLM grazing permittees (more than 85), drew a large crowd to the Rio Blanco County exhibition hall on New Year’s Day. According to grazing advisory board member Mike Lopez, stockgrowers would like justification for why the letter was sent to all permittees and they want Walter to withdraw the proposed decision and meet with permittees individually before implementing “temporary changes” in grazing uses to include “A minimum 50 percent reduction in grazing use from June 1, 2013 through February 28, 2014,” as part of the Notice of Proposed Decision reads. T. Wright Dickinson (standing, left), president of the Colorado Cattleman’s Association, and Wyoming attorney Dan Frank (standing, center) suggested all stockgrowers protest and request a meeting before the Jan. 7, 2013 deadline “to avoid any bad final decisions.”

Listen to this post In February the CDPHE issued an ozone alert for the afternoon of Feb. 15 through the early morning of Feb. 16. On Feb. 13, ozone levels (one hour averages) reached 93 […]

Listen to this post RBC I The Bureau of Land Management’s Colorado office, in partnership with the Public Lands Foundation and the Center of the American West, will host a juried art contest for Colorado […]

Western counties battling feds with use of ‘coordination’