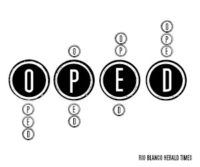 RBC | Last winter in these pages I reviewed consensus studies predicting impending dire consequences of climate change (IPCC Special Report, 2018; Fourth National Climate Assessment, 2018). Now the biologists have weighed in with a consensus evaluation of the health of the world’s ecosystems (IPBES, 2019). We’re in trouble.

With our every breath we inhale a molecule or two from Caesar’s last breath. We’re re-breathing Caesar’s air (and exhalation from every other air-breathing creature, for that matter). That’s a comment on how small are the air molecules, and how many. It’s also a comment on how limited is our atmosphere. That’s the main point. It’s finite. It’s small. The apparently infinite blue of a clear day is deceiving. I can show you the calculations. So can any high school algebra student, if they take the time.

And take a look: Earth’s atmosphere as seen from the International Space Station.

That thin rim, that’s the atmosphere. That’s the reservoir of oxygen for all life on the planet. That’s where we dump all of our CO2 and diesel smoke and methane flares. In proportion, it’s as thick as a piece of paper on a basketball. Think about it. Just take a moment, and think about it. A piece of paper covering a basketball. That’s our atmosphere.

Another gee-whiz. Every gallon of gas adds about 20 pounds of carbon dioxide to the atmosphere. That adds up pretty quick. Americans altogether burn roughly 384 million gallons each day; that tallies to about 7.6 billion pounds of CO2 we add to the atmosphere. Daily. Every day. I can show you the math. So can any high school kid who takes the time.

Which brings me to the IPBES report, the Intergovernmental Science-Policy Panel on Biodiversity and Ecosystem Services. You may have heard the headlines; for starters, one million species in danger of extinction. Those headlines lasted about a day in the news cycle. Here a moment, then gone and forgotten, swamped by more compelling Facebook posts and Twitter feeds.

IPBES collated and analyzed ecological research studies from around the globe. It’s the most thorough and extensive study available on the health of the planet. I know some of the people who did the science. They are serious, no-nonsense, and data-driven. They are not prone to hysteria. But they are extremely worried. Ecosystems are collapsing, and ecological services are disintegrating.

Some of the numbers: Human activity has transformed more than three-quarters of the planet’s land surface and about two-thirds of the world’s oceans. We have destroyed 85% of the world’s wetlands, half the world’s coral reefs. We use more than half of the earth’s fresh water. We are consuming natural resources at more than one-and-a-half times the rate at which those resources—timber, fisheries, wetlands, soil, etc.—can be restored.

That’s unsustainable. That’s beyond the capacity for earth’s natural systems to survive. Whole ecosystems—tundra and taiga and northern deciduous forests and prairies and deserts and tropical rainforest and coral reefs and kelp forests and mangrove swamps and delta wetlands—all disintegrating. Because of human activity. Because of us. The list goes on. There are 1,500 pages in the report, what we’ve done and what are the consequences. Take time, at least, to read the summary. Take time to think a little bit about what it says.

To be clear, it’s not just people out there chopping down trees or shooting the last black rhino. It’s a combination of wide-scale habitat destruction, planned and incidental, and just plain the result of too many people on the planet. It’s topsoil depletion to grow more crops to feed more mouths. It’s urban expansion. It’s climate change withering some regions, drowning others. It’s introduction of invasive species that can outcompete the natives. It’s each of us and all of us.

We are like astronauts on a space walk, and we’re cutting our own life-support tether to the planet. Maybe that will finally wake us up. Those forests and diatoms provide the oxygen we breathe. Wetlands clean our water. Soil grows our food. Pollinators fertilize our crops. There’s no us without them.

For the bean counters, it’s many trillions of dollars of economic LIMAservices at no charge. Ecosystem services. If only we had the sense to take care of those ecosystems, but if their contributions don’t show in corporate quarterly reports, nobody pays attention.

It’s not as if people woke up this morning and realized, golly gee, we’re in trouble. The scientific community started sounding alarms more than 30 years ago. We could have made some relatively inexpensive adjustments back then. Changes in energy production. Changes in consumption. Wiser management of the ecological commons. We didn’t. Now, having dithered and hemmed and hawed and delayed, it’s going to be really hard. IPBES puts it in stark terms. This is a looming disaster, and it requires transformational change. Transformational change at societal scale—how we produce energy and protect the environment—and transformational change at the individual scale—how much, and what, we consume.

Sometime, if you have time, take a gander at the 1990 “pale blue dot” image of earth snapped by Voyager 1, looking back at home from out beyond Neptune. (https://www.jpl.nasa.gov/spaceimages/details.php?id=PIA00452)

You have to look close. The colored bands are artifacts, camera trying to focus close to the sun. We’re circled in the image, about halfway through the orange streak at the top. Planet Earth.

Voyager 1 and Voyager 2 carry gold disks with recordings that sampled life on Earth. Bird songs, the song of the humpback whale, human music, lobsters snapping their claws. The sounds of life. Idea was if alien space-farers happened across one of the Voyagers, they would learn a bit about the pale blue dot. It would be a tragic irony if the only remnant of a once-vibrant planet, teeming with life, was carried on those gold disks on those lonely spacecraft, outbound to the stars.

Listen to this post Peggy Rector never thought of herself as a trailblazer. But that’s what she was. “That really wasn’t even on my mind, to be honest with you,” she said. Rector was the […]

Mount Main was a winter obstacle to be overcome

Listen to this post I know many people don’t care for the snow, but, myself, I am very fond of snow. I have fun memories of the snow and this time of year. I want […]

Listen to this post Wrestling, still no respect? I am a senior at Rangely High School this year. I have been wrestling for 11 years, and it is a sport that my family and I […]