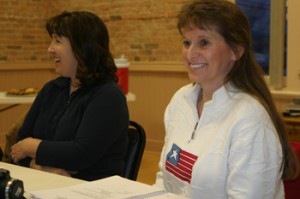 MEEKER I Reminiscent of the 1976 movie, “Network,” there are plenty of people who are “mad as hell, and they aren’t going to take it anymore.”
They may not be sticking their heads out the window and screaming at the top of the lungs, like the fictional character Howard Beale encouraged people to do in the movie, but they are speaking out. And they are angry.
Tapping into a growing national frustration with big government, about 75 people packed the Community Room at Mountain Valley Bank on April 6 for an organizational meeting to form a local Tea Party group.
In Rangely, there was a Tea Party organizational meeting at 7 p.m. Thursday in the banquet room of the Johnson Building on the campus of Colorado Northwestern Community College.
The name of the Tea Party group, which has become a national movement, draws its inspiration from that most historic protest period in American history — the Boston Tea Party of 1773. The “TEA” in Tea Party is also an acronym for Taxed Enough Already.
Jeannie Durham of Craig was a guest speaker at last week’s meeting. She’s involved in Tea Party groups in Craig and in Steamboat called “1773.”
“It’s just like you, it’s passionate,” Durham said. “But I’m jealous. You’re more passionate.”
Durham told people who showed up for the first Tea Party meeting in Meeker it was important to get involved, to show up at the polls and back political candidates who share their views, and to make their voices heard.
“If they don’t hear us in November (for the general election), I only know of one person who can save us after that,” Durham said.
Lois Sampson and her husband, Frank, organized the local meeting, not knowing what kind of a turnout to expect.
“We just wanted to have a meeting and see who showed up,” Lois Sampson said.
And show up they did. More chairs had to be set up to accommodate the crowd.
During the individual introductions, besides giving their name, people also told their reason for attending the Tea Party meeting.
Here’s a sampling of comments:
“I believe government is getting too big.”
“I’ve had enough of Reid, Pelosi and Obama.”
“Over the past months, I’ve become more disgusted with the like-it-or-lump-it attitude. I’m tired of taking it.”
“I fought for this country back in the ’50s, and it looks like there will be a lot more fighting ahead.”
“I’m here because I’m really pissed off.”
“I’m ready to get involved, to do whatever it takes to get this country back on track.”
“I’m sick of big government at the federal level, state level and the local level. There’s too much of it.”
“If they’re going to shove health care down our throats, what are they going to do next? Take our guns?”
“I wanted to come and see what this is all about … because I think our government is out of control. If we sit back and be apathetic, nothing’s going to change.”
“It (people’s frustrations with the direction of the country) may be a blessing in disguise, only because it creates this kind of gathering … even when the Republicans were in charge, it wasn’t any better. The other reason I’m here, I thought Sarah (Palin) was going to be here.”
“I’m a card-carrying member of the Democratic Party … but I’m here to listen and learn something.”
“It’s not just Obama … when we start writing God out of our country and our lives, we are doomed.”
“Nobody is taking our guns, if I have anything to do with it.”
“Party politics is the wrong way to go … we have a government that is out of control on spending … it’s time people have a voice.”
“I believe the New World Order needs to be defeated, before it takes control.”
“I’m proud we have a country we can do this in.”
“We can have these meetings until we’re blue in the face, but we have to do something. At what point are we going to stop having meetings? I don’t know what to do, but I’m willing to do just about anything. What are we going to do?”
“We vote, peacefully.”
Lois Sampson read aloud the mission statement for the Meeker Tea Party group, which is to support: Free enterprise, limited government, individual freedom, traditional American values, a strong national defense and to defend the Constitution of the United States of America.
Some of the people who attended last week’s meeting gathered again Tuesday to make signs for a Tea Party rally today — on Tax Day (the deadline for filing federal tax returns) — at Craig. The Meeker Tea Party group’s next regular meeting will be April 29 at 7 p.m. at the exhibit hall at the Rio Blanco County Fairgrounds.
“What we’re planning is to have a meeting every month,” Lois Sampson said.
The candidates for county commissioner have agreed to speak at the Tea Party group’s meeting on the 29th.
“I invited them all and they said they would come,” Lois Sampson said. “They will give us a statement and then they will answer questions.”
While the group is in the beginning stages, its organizer said she was pleased with the response.
“It’s been great,” Lois Sampson said. “I’ve been getting a lot of e-mails. It’s a learning experience, for sure. So far, nothing too negative. It’s all been good. I’ve had a lot of people tell me they were sorry they missed the (first) meeting.”
A local protest rally was set for May 6, but the location has yet to be determined.
“To make an impact, it has to be a good group where we all have a sign and show up,” Lois Sampson said of the rally. “We don’t know where we’re going to have it yet. All we know is we’re planning on having one.”

ERBM dance students to perform May 9

MEEKER I ERBM Recreation and Park District Academy dancers, directed by Kari Jo Stevens, will perform on Mother’s Day Sunday, May 9, at 5 p.m. at the Meeker High School Auditorium.

RANGELY I The Rio Blanco BOCES staff started a “Feeding Our Future” backpack program in September. This program is designed to provide nutritious food on the weekends to students in the Rangely and Meeker school […]

MEEKER I Learn to make business cards, fliers, newsletters, brochures, etc. using Microsoft Windows. This is a fun class designed for people with a basic understanding of Windows.