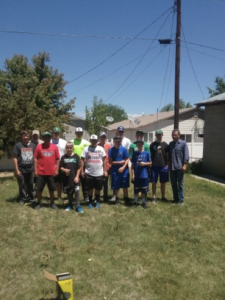 Rangely is still suffering hard times. There have been a couple of businesses that have closed and people are still struggling to keep jobs or to find work.  Therefore, a Food Bank is greatly needed in Rangely.  With the great support that the Rangely Food Bank received the people receiving the food greatly appreciated a place to go in the time of need.  The sports team at the Rangely Schools were huge supporter of the food bank as they help unload our huge load from the Food Bank of the Rockies.

The board is actively brainstorming on more opportunities to raise for the future. Currently the Rangely Food Bank is serving around 30 families a week.  During the current time of Rangely the Rangely Food Bank received an awesome response to the fundraiser from local businesses and family who donated cash to the fundraiser.  The board thanks you.