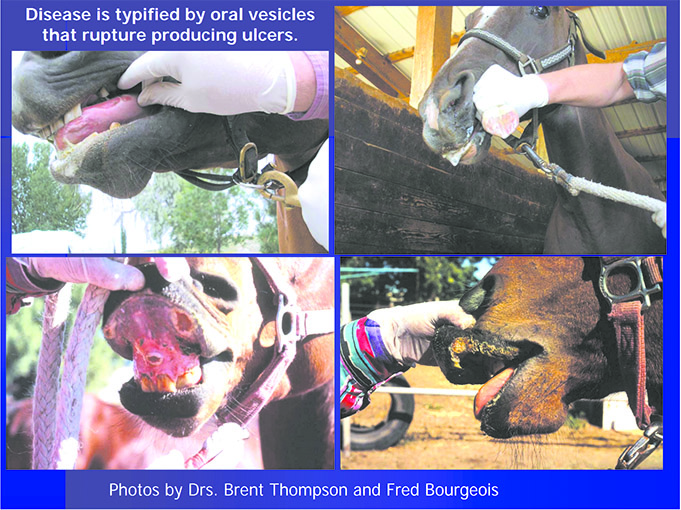 RBC | Vesicular stomatitis, or VS, is a virus that primarily afflicts horses and but can also affect pigs, sheep and goats. Flies and midges are the primary vector for the virus, which causes mouth ulcers and can cause lameness if it affects the coronal band, among other symptoms. It can also be spread through direct contact with an infected animal. This year’s strain, according to veterinarian Stacy Hudelson, is different that previous years.

“It seems to be spreading faster,” she said. “I expect to have it in Rio Blanco County before the summer’s out.”

Currently there are 54 active cases in the state, and 64 premises are under quarantine. On the Western Slope, cases have been reported in Archuleta, Mesa, Delta, Montrose, Montezuma and Ouray counties.

The illness is not fatal, and most animals recover within a week or so, Hudelson said. The virus is, however, contagious, and animals can be infected and spread the illness before they show symptoms. There’s also a risk of complications, such as secondary infection in the lesions. Humans can also contract the virus, which manifests with flu-like symptoms.

Hudelson said ideally the health certificate should be written within seven days.

“Most boarding and training facilities have really good protocols,” she said, adding that local personnel at the various facilities could easily be trained to inspect animals on arrival for symptoms.

The commissioners and facilities project coordinator Eric Jaquez, who brought the biosecurity concerns to the board in a work session Tuesday, agreed that they need to get a protocol in place sooner rather than later. Hudelson said the Vet Clinic is more than willing to work together with the county to set up an effective biosecurity protocol longterm and in response to VS.

Hudelson suggested fly control on premises, fly spray twice a day for individual animals, and visual inspection for symptoms for all livestock owners. If the disease is found, every animal on the premise has to be quarantined.

Anyone who suspects an animal is infected should contact their veterinarian.

– Blisters, sores and sloughing of skin in the mouth, on the tongue, on the muzzle and ears, and above the hooves; occasionally on the teats or genitalia. This year’s strain has been causing lesions on the ears.

– Drooling and inability to eat may occur.

– Lameness and weight loss may occur

The It’s a Way of Life Community Club met Feb. 16 at 6 p.m. The highlight of the meeting was the coffee cup suet bird feeders. Each member brought a coffee cup and the club […]

RBC I In mid-April, the U.S. Department of Labor released a Notice of Proposed Rulemaking titled “Temporary Agricultural Employment of H-2A Foreign Workers in the Herding or Production of Livestock On the Open Range in […]