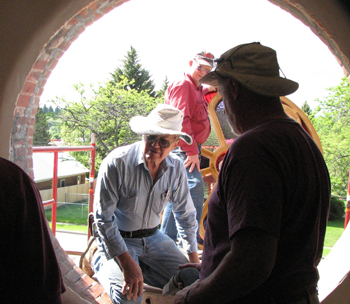 MEEKER I Jim Ruckman isn’t Catholic. And he’d never made a church window before.
But that didn’t stop him from taking on the job.
Ruckman, 72, has been in the construction business his entire working life. That experience came in handy when he agreed to make a new window for the front of the Holy Family Catholic Church, 889 Park Ave.
“I was working with Mike Whalin at the time, and they asked him to do it. He said he couldn’t, but I might. So I went and looked at it. I thought, ‘Yeah, I will do this, just to see if I can.’ So I took it on.”
While Ruckman did the woodwork, Sandra Wambolt of Meeker did the stained-glass work for the window, which is on the outside of the church’s choir loft, facing the street.
“We’re very pleased with it,” said Bill Ertmer, a deacon at the church, adding funding for the window project came from a grant from the Fairfield Trust and donations.
Wambolt has done other stained-glass work for the church.
“I did the other free-standing windows on the inside (of the church), and there’s a little window in the entryway that I did in memory of my mother, so Bill asked me if I would do this one,” Wambolt said. “It was a challenge.”
Ruckman saw the window as an opportunity to try something new.


“I’ve never gone to the church. I don’t belong to the church. I just did it because it was a challenge,” he said.
Ruckman began work on the window about three years ago. The window was installed earlier this summer.
“It took about 400 hours to complete,” he said.
Asked how much the window cost, Ruckman said, “(The church) wanted to know how much it will cost. I said, ‘You put the cost on it. I’m going to build the window whether you want it or not.’”
Money wasn’t the reason Ruckman wanted to build the window.
“It didn’t wind up very much (pay) per hour,” he said. “It was a challenge, and I like a challenge.”
Not that it was an easy job.
“I don’t think I even swore at it, but I was frustrated a few times,” Ruckman said. “It was a big challenge how to make it better than the old one. The old one … the people who built the original, they didn’t have the tools I have now. But they were pretty good craftsmen. They made that out of six-by-sixes.”
Due to its age, the original window was in bad shape.
“We saved it when we took it out. We put a strap and cinched it up tight, so it wouldn’t fall apart,” Ruckman said. “It was in terrible shape. It was just all withered.”
Installing the new window was a difficult process.
“It’s not quite complete yet,” Ruckman said. “I haven’t put the plaster around the inside yet. The original window … it was kind of smashed down because the building settled down on it. The hole is egg shaped. I had to cut over an inch out of the top and the bottom (of the hole) to make the new window fit.”
Ruckman could appreciate the history of the church building – constructed in 1912. His family has a long history in Meeker, too.
“My family has been here since 1885,” Ruckman said. “My granddad’s family went through this area on their way from Missouri to California. When they got to California, my granddad got on his horse and came back to Meeker by himself, and he was 12 years old. He liked it here better than in California.”
While he’s still putting the finishing touches on the new window, he’s happy with the final results.
“It’s prettier on the inside than it is on the outside,” he said.
And Ruckman is a hard customer to please.
“I never do something quite as perfect as I would like it to be,” he said. “But it didn’t turn out too bad.”

MEEKER I After more than a month, the gym at the new Meeker Elementary School has reopened. The gym was closed Oct. 6 because of safety concerns after it was discovered the east wall had […]

The White River is not flooding yet but the near-record snowfalls this season could result in major spring run-off. Rio Blanco County emergency manager John Hutchins said the town and county have prepared a plan […]