MEEKER | Distance running is considered an individual sport by most but when the distance is 100 miles and takes more than 24 hours to complete, a runner might need some help, which is what local runners Lisa Belmonte, John and Christopher Strate, Carly Thompson and Kris Casey did for Marty Casey last week in the Grand Mesa Ultras.
“It was amazing,” Marty Casey said, after taking more than one day (29 hours and seven minutes) to run up, down, around and on top of the Grand Mesa, the largest flat-topped mountain in the world, in the Grand Mesa Ultras, which include four distance races, a 100-miler, a 50-miler, a 55-kilometer and a 30-kilometer. Meeker runners were represented in three of the four races.
It was the first 100-mile race for Marty Casey, who is Meeker High School’s head cross country coach, and the first 30K for John Strate, who is Meeker High School’s head track and field coach. The Grand Mesa Ultra was Belmonte’s third 50-mile race and she hopes to one-day complete a 100-miler.
“I’ve run plenty of races and in 2011 ran my first marathon, ran a few of those and pushed a little harder and further, then I ran a couple of 50-milers, so this was kinda the next step,” Casey said. “It was at least as hard as expected and the mental part was big.” 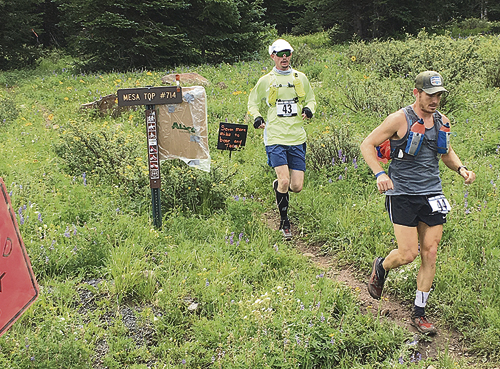 Casey credits his “pacers” for helping him finish the race. Belmonte, possibly Meeker’s most active and accomplished runner, ran the 50-miler, which started at the same time as the 100-miler, so the two local runners were able to meet up about 10 miles into the race, at the highest point of the race, the Crag Crest summit, which sits at an elevation of 11,200 feet. The average elevation of the race is 10,000 feet.
“Marty was ahead of me, so I was not pacing him but trying to keep up,” Belmonte said. “It was inspiring when I could see Marty and the other 100-milers, knowing what they were going through and they were running twice as far as I was.”
Casey said there were several check points, every 10-13 miles, where he would sit and rest, change his wet shoes (four or five times) and eat, mentioning how great a bacon quesadilla tasted.
“I was worried about the night running,” Casey said. “Being up for a long time, I tend to get a little weird, so I credit my pacers John and Kris (Casey’s wife), Christopher Strate and Carly Thompson for running with me in the dark.
“I typically only run one race a year in November,” John Strate said. “I just did this one because I wanted to help Marty out with his 100, so I knew I would be there already. The course was phenomenal, great views and lots of single track.
Twenty-seven runners started the Grand Mesa Ultra 100 and although not all of them finished, Casey was the sixth to cross the finish line. Belmonte and Strate both finished second in their races.
“It was great seeing Meeker so well represented,” Strate said.

Casey said he had been training for the race for more than six months and the day after the race, he was sore and wanted to take some time off.
“Maybe I’ll take a year off from the big races, all my weekends have spent running,” Casey said. “My wife and I have not been rock climbing once this year. After running for seven hours on a Sunday, you don’t want to do much else.”

Valentine’s Day Specials for you!

Valentine’s Day is tomorrow – are you ready? Check out great deals and #shoplocal!

RANGELY I From time to time, in what is often the most unpredictable moment, someone comes along and makes a significant impact on our life. Perhaps it is due to the field in which they […]