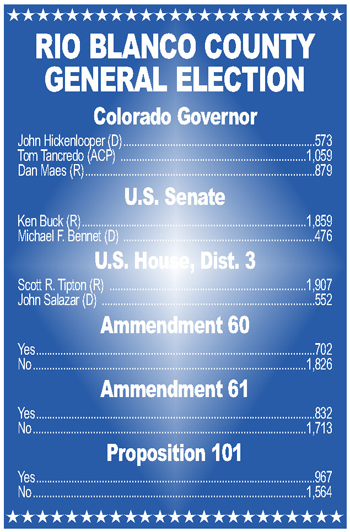 RBC I Voters, locally, turned out in big numbers for Tuesday’s general election.
Seventy-six percent of voters in Rio Blanco County cast ballots. In some races, the outcome of local voting followed the statewide results. In other races, RBC voters bucked the statewide trends.
Speaking of Buck, Ken Buck, that is, local voters overwhelmingly supported the challenger in the U.S. Senate race. Seventy-four percent of local ballots were cast in favor of the Republican Buck, while incumbent Democrat Michael Bennet garnered just 19 percent of the vote locally.
At the state level, the two candidates were locked in a too-close-to-call U.S. Senate race, with each candidate claiming about 47 percent of the total. The slim margin spurred talk of a possible recount.
However, the Denver Post called the race Wednesday morning, with Bennet receiving 47.7 percent and Buck 46.8 percent.
In the governor’s race, Rio Blanco County voters supported American Constitution Party Candidate Tom Tancredo with 41 percent of the ballots cast, while Republican Dan Maes received 34 percent and Democrat John Hickenlooper just 22 percent. At the state level, however, Hickenlooper was the big winner, followed by Tancredo and, in a distant third, Maes.
“I wish the new governor the best. I hope he keeps western Colorado in the forefront, instead of the back burner,” said Rangely Town Manager Peter Brixius. “I think we hold the keys to a lot of economic revival in this state.”
By a three-to-one margin, Rio Blanco County voters supported Republican challenger Scott Tipton over Democratic incumbent John Salazar for the U.S. Congress, representing District 3. Tipton received 75 percent of the vote, locally, while Salazar received 22 percent. Statewide the margin was much closer, with Tipton receiving 50.2 percent and Salazar 45.6 percent.
“I was really pleased with the outcome of this race,” Brixius said. “I didn’t think Salazar represented us well. I feel Tipton will have our best interests in mind.”
On three controversial tax-cutting measures — Amendments 60 and 61 and Proposition 101 — the outcome of local voting mirrored the state returns. All three measures were overwhelmingly defeated locally — Amendment 60, 70 percent no to 27 percent yes; Amendment 61, 66 percent no to 32 percent yes; and Proposition 101, 60 percent no to 37 percent yes. Statewide, voters soundly defeated all three measures.
“I’m absolutely delighted that they failed. They deserved to fail, not being in the best interests of the people of Colorado,” said County Commission Chairman Ken Parsons of Rangely. “The key thing was a lot of business and community leaders around the state really came together on this. They were instrumental in the defeat.”
For state representative District 57, incumbent Republican Randy Baumgardner won easily with 83 percent of the local vote, while only 13 percent of the ballots cast locally went for Democrat Steve Ivancie. Baumgardner received 64 percent of the vote districtwide.
“I was happy to see Randy did so well as our House representative,” Brixius said.
Rio Blanco County Judge Laurie Noble of Rangely was easily re-elected, with 67 percent yes votes.
In the seven local races, the general election was a formality, as all seven Republican candidates ran unopposed. County Commissioner Shawn Bolton received 75 percent of the vote, County Clerk Nancy Amick 84 percent, County Treasurer Karen Arnold 82 percent, County Assessor Renae Neilson 79 percent, County Sheriff Si Woodruff 80 percent, County Surveyor Leif Joy 82 percent and County Coroner Dr. Albert Krueger 82 percent.

Listen to this post The Bakery — a Meeker icon for nearly 30 years owned by Dave and Enid Steffen — closed its doors Christmas Eve. See more photos in this week’s Herald Times (online […]

Listen to this post Data gathered at a new air quality monitoring site in Rangely resulted in an  “ozone action day alert” for western Rio Blanco County in early February.

Listen to this post RANGELY I Feeling that his town has been left out of consideration for too long, Rangely Mayor Frank Huitt believes the Early Education Center, which is now for sale by Rangely […]

Panther baseball ends season with a win over Cedaredge