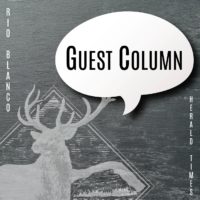 MEEKER | Reporting and telling someone else’s stories is an awesome responsibility. The editor of this community’s paper, Niki Turner of the Rio Blanco Herald Times, understands the importance of that. It also seems that she also understands that the word awesome seems to be put in conversation daily. Ask someone how their day is going and they might replace great or wonderful with the word. If Turner described her experiences as a journalist with that same word, some people might question that response, or make light of it.

No one can imagine how an experienced reporter not only is able to winnow through all the factual information regarding an event, bad and good, but in the end feels accomplished and satisfied with all of the efforts. Turner might also tell you in no uncertain terms that in her position as reporter and editor, she sees both the best and the worst of humanity, yet she continues to use her journalistic experience to carry out this job responsibility.

In the article, “Through the Cracks,” which was the cover story in the Nov. 7, 2019 edition of the Herald Times, Officer Kinney describes his town as a “rumor basin” and says if people do not know something about you they will make it up. The longer the silence goes on, he says, the worse it gets. He continues to say that the town’s silence on the surface and all of the undercurrents stirred up by continual speculation and gossip were unbearable, resulting in his own declining mental health.

There are folks who report the same behavior from the eastern edge of the county as well. It seems to suddenly surface and is reported time and time again from residents who work in law enforcement, education, or many other aspects of the community. It has been a problem in rural areas for many years. It is also one of those things that gets talked about on the community grapevine, and yet never talked about openly.

As a fledging reporter years ago, I addressed the serious community problem of alcohol and drug abuse in our community, as well as conducting extensive interviews with adults, teenagers, and mental health professionals about the damage wreaked by the silence surrounding alcohol and drug abuse. I had gathered so much information that my editor and I decided to run it in two parts. One teenager who said she struggled with alcohol mentioned that by the time she was a freshman in high school, she would head home for lunch and drink her way through the lunch hour before heading back up for her afternoon classes.

The community response to that article was interesting, as I had a few folks tell me that they already knew that it was a big problem for Meeker, but they also felt that addressing it openly wasn’t the way to solve it. More than a few people felt that way, and the teenagers who tried to get help by reaching out to their friends and family were told to stop talking about it. They came to feel it was their problem. The newest mental health professional responsible for serving both communities during those years accused me of being part of the what she termed the “Meeker Way.” She felt strongly that one or two articles a year were not sufficient to make a change.

One mental health provider from a neighboring county was quoted in the article saying that because of the lack of funding in the rural areas for mental health, it appears as if the price of a life in a rural area is lower than the price of a life somewhere else. A firm believer that coming together as a community to talk about mental health would be a step forward, this professional also points out that both communities that make up Rio Blanco County could benefit from this. The sounds of silence during those boom years were deafening and seemed to create even more mental health problems in all segments of the community. Apparently not much has changed and the silence continues. I believe that there are a sizable group of residents living in both Rangely and Meeker, who won’t be content to live with that perception that the price of life is cheaper in Rio Blanco County.

By DOLLY VISCARDI | Special to the Herald Times

Listen to this post MEEKER | Ever since a hometown boy posted a photo of both covers of my picture books on his Facebook page with the words “Look what I get to read tonight,” […]

Listen to this post Did you know? Mental illness affects one in five Americans? Nearly half of those affected do not seek treatment?

Listen to this post Are we there yet?” takes on new meaning when one heads up the White River to share a favorite hiking and fishing spot.

Meeker Classic will extend competition a full day in 2021