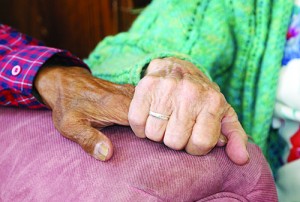 Charles and Muriel Devereaux have lived in the Meeker area for the majority of their lives and share a tangible love still evident after more than 50 years. Their eyes light up when they talk about each other.
Charles, 84, was born and raised in the area; a man known for his honesty and hard work. He served in the U.S. Army in World War II.
“He was in the army of occupation in France when the war was winding down,” Muriel said. Meeker’s VFW Post #5843 honored Charles last Memorial Day by selecting him to throw the traditional wreath into the White River and to place another wreath on the Veteran’s Memorial at Highland Cemetery. The award came as a surprise to Charles, a humble man, but not to his wife.
“You deserved it, Lovie,” she said.
Charles is proud of the town he has always called home. He met Muriel when she moved here during her high school years and says, “God put them together.”
Charles operated heavy equipment and did whatever work needed to be done, from roads to reservoirs. He and his brothers, John, Jim and Lawrence, owned their own business. Charles grew up working hard and his honesty and kindness made people in the community appreciate and respect him.
Muriel was raised on a ranch about 40 miles downriver owned by her parents, the Thompsons. They raised cattle early on and added some sheep later. Her father moved here from Carbondale, Colo., to make a life for his family.
Muriel loved her life away from town and after meeting Charles, the two lived up Lion’s Canyon west of Meeker. They then moved into a house which was once the Episcopal church parsonage before moving to Seventh Street. Muriel still lives there and visits Charles every day at the hospital.
The two hate to be apart and Charles worries about not being able to take care of her the way he used to. Muriel misses her time living away from town and all the peacefulness it provided.
“The best times of my life were spent out of town,” she says.
Charles and Muriel never had children together but she had five kids from a previous marriage. Charles took Allen, Tommy, Kenny, Lois and Lauren in and was an outstanding father to them all. The elder Devereauxes now have 12 grandchildren and several great-grandchildren.
Muriel loved to read. Anytime she didn’t know how to help her children and grandchildren in their school years, she learned the information along with them.
“Her house was like a library,” says one grandchild. “She could help us with anything.”
She always enjoyed planting gardens and being outside. At one point, Muriel taught a class on local plants for people from Rangely and Meeker. A former student recalled her incredible knowledge. Her knowledge came from a yearning to learn and from her ranch upbringing.
Muriel is 83 now and laughs lovingly when asked about Charles. She has seen the times in Meeker change but not her love for her husband. The two made a life for their family based on love and hard work. They enjoyed time together and spread that love throughout.
Charles and Muriel make it so clear that it makes no difference where you come from or how you got there, the true story is in the journey. Their story has taken them through many trials to a place they can be proud of — proud of the town they call home and more importantly, proud of their love for one another. Their lives are an example of service and triumph, and an inspiring story of a lasting romance.

MEEKER I Eight teams from Meeker traveled to Rifle to participate in the Western Slope Destination Imagination Tournament on March 18.

MEEKER I A good coach can always bring the best out in his athletes and the late Bob Tucker was known for doing just that, whether on a football or baseball field or basketball court. […]

“Still standing — twice,” the mother of an almost-1 year old reported recently. The grandmother inquires regularly as to his latest accomplishments and is used to the mother reporting all sorts of changes that mark […]