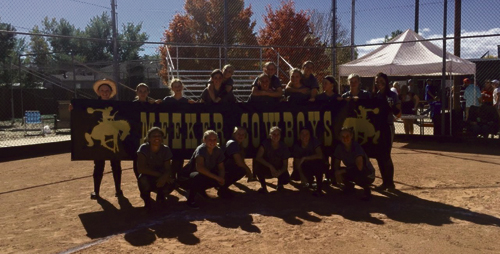 MEEKER | The Meeker Cowboys softball team competed Saturday in a playoff battle with the Limon High School Badgers. The Cowboys jumped to a quick 3-1 lead in the first inning. The Badgers then battled back and by the fifth inning gained the lead with an 8-4 advantage. Persistence paid off in the sixth as the Cowboys had multiple hits and exceptional baserunning and the Limon Badgers were unable to make any plays to stop the Cowboys offensive attack resulting in a 12-8 victory for the Cowboys. Offensive leaders were Sierra Williams, Megan Shelton, Tori Lasker and Mackenzie Marshall with 11 hits between them. Strong pitching from Tori Lasker led the defensive front with Sidney Shaffer, Tori Lasker, Sierra Williams, Julia Christensen and Megan Shelton assisting in 15 putouts for the first baseman Jasmine Patterson. After the important qualifying victory, the Cowboys did seem tired and suffered a loss to the No. 1 ranked team in the state, the Strasburg Indians. Their win over the Badgers qualifies them for the state tournament this weekend in Denver.