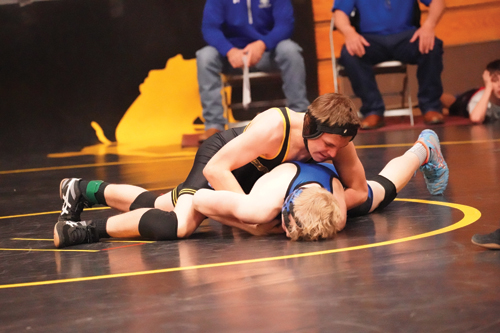 Blunt, Clatterbaugh, and Dade had an undefeated regular season.

“We finally beat the Moffat County Bulldogs in a tournament,” said head coach Todd Morris, “It wasn’t easy, came down to the last and final match of the day. Tanner Musser wrestled very smart, it went into triple overtime and Musser won by one point.”

“This group of boys showed their true grit Saturday,” Morris said. “There were a lot of sick kids, with as few as six out of 35 at practice, but they met the team goal of each kid winning one match throughout the year.”

Morris attributed his success to all those who provided support in some way. “I would like to thank Kurt Blunt and Steve Giannetti, my assistants, for taking time to help coach. Without their knowledge and expertise, we would not have been as successful.  Also Chris Selle, he is very busy with the high school renovations but managed to get in the room and to a couple tournaments to help out.”

“What a wonderful community we live in,” said Morris talking about the help from JC Watt and Selle during the Saturday tournament, the parents’ support in the hospitality room and their time working the tournament and those who donated to the program: Kelly and Denise Sheridan, Mike and Sam Lopez, Blaine and Heather Franklin, John and Tawnie Halandras, Garrett White and Tiffany Jehorek, Steve Gianinetti and Kurt and Hallie Blunt.