MEEKER I “One game doesn’t make a season, but we did some good things,” Meeker head football coach Shane Phelan said of his team’s 36-0 rout of the 3A Basalt Longhorns Friday at Starbuck Stadium.
Many of the 40 Cowboys listed in the game program saw action in the season opener against the larger school.
“We got a lot of guys in and were able to see how they perform,” Phelan said. “I was pleased for the most part, we moved the ball well offensively but we had too many penalties, we’ll need to work on that.”
The Cowboys are big, fast, quick and experienced this year, with 12 seniors leading the way.
The season started with the Cowboys kicking off and although they allowed the Longhorns a couple of first downs on the opening drive of the game, Meeker’s defense forced Basalt to punt.
“We flew around the ball pretty well,” Phelan said with a grin about his defense, featuring size and speed.
Seniors Tyrell Gerloff, who according to the program is the biggest Cowboy, listed at 6-3, 230 pounds on one side, and one of the fastest on the team Pat Love (5-10, 165) on the other side, provided pressure from their defensive end positions, while classmates Jarett Waldref and Cesar Lopez played in the middle. Senior Ever Olivas, along with juniors Ryan Wix and Cole Steiner, started as linebackers. Seniors Brock Campbell and Mitch Jacob, along with juniors Jake Nieslanik and Trevor Matrisciano, started in the defensive backfield.
The Cowboys took over at the 20-yard line, led by senior quarterback Colton Brown and never looked back. Brown had two big runs during Meeker’s opening drive, including a 40-yarder for the first touchdown of the season. 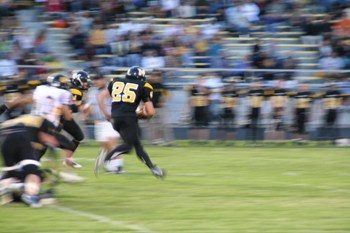 “Brown had a good game, but you don’t have those things happen, without other guys doing good things, we had a lot of guys step up and play well,” Phelan said.
Meeker’s offensive line, anchored by Waldref at center, guards Olivas and sophomore Justin Hardy, tackles Spencer Madison a senior, and junior Ryan Wix, average 188 pounds.
Gerloff, who starts at fullback, and Jacob at tailback, blocked for each other and each scored a rushing touchdown. Matrisciano and Campbell both caught touchdown passes and senior wide receiver Dakota Rowlett caught a pass from Brown for a two-point conversion. Senior Nate Bradfield was also a receiving target for Brown, as was junior Jared Frantz and senior Johnny Wix, who was in on several tackles on defense.
Meeker travels to Olathe on Friday to take on the defending 3A state champions, with kickoff scheduled for 7 p.m.
“This will be a good test for our team,” Phelan said.
Facebook Notice for EU! You need to login to view and post FB Comments!

MEEKER I “The reason we are asking for continuation is because we have had some issues with the exact location which we applied for,” Aaron Gunn, a representative of Mercury Towers said. Facebook Notice for […]

For nearly 30 years as a coach and teacher, Bob Tucker touched the lives of students. Tucker died in 2006, but through a golf tournament honoring his memory, his legacy is still having an impact […]