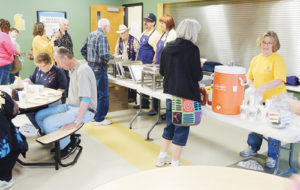 MEEKER I If you look around at almost any social event during the year in Meeker, chances are good the Meeker Lions Club is there, helping out, bartending at this weekend’s After Birth Ball or sponsoring last weekend’s annual Easter egg hunt or putting on a barbecue at the Rio Blanco County Fair.
Lions Club President Tom Allen, completing his second term as president of the club in May, is proud of the club, which is just now winding up its 90th year in Meeker.
“We’ve got 54 members in the club, and we stay pretty active,” Allen said. “There aren’t many weeks we aren’t doing something.”
The Lions Club is the only service club in Meeker, but they often fill the gaps that other service clubs might carry out.
The overall mission of Lions clubs around the world is eye care.
“We provide eyeglasses to the needy in Meeker and Rangely,” he said. “We have even provided eye surgeries in some cases and we make various contributions to families with other medical needs as well.”
The club also contributed $1,700 to Dr. Robert Dorsett’s 2014 Belize trip for Meeker High School students headed to Belize to work with dolphins and do dolphin research.
The list of events that the Lions annually take part in includes: running 12 to 15 cash bars at events in the area; providing lunches for special days for the ERBM Recreation District; providing lunches twice a year for Colorado Parks and Wildlife meetings; provide breakfasts for the 9Health Fair (held last weekend) and for Breakfast with Santa, sponsoring the Easter egg hunt (held last weekend) and the group also does Christmas tree sales.
On the Fourth of July, the group has concessions at the Rio Blanco County Fairgrounds; the club offers lunch at the Meeker Championship Sheepdog Trials; and they hold bingo two nights a month from October through May, raising money for the scholarships that will go to Meeker High School seniors (last year the club gave eight $500 scholarships to the seniors).
Other outside projects include painting and maintaining the school administration building and there is a project under way to build benches in memory of attorney George Benner.
Lions clubs are international philanthropic organizations working under the motto of “Leadership, Intelligence and Our Nation’s Security.”
With the main mission of Lions clubs globally being centered on vision, Allen said the club gives several pairs of glasses annually between Rangely and Meeker.
“With no Lions Club in Rangely, we include them with the glasses,” Allen said. “If anyone at any time has old glasses laying around the house or gets a new pair of glasses, all they have to do is give those glasses to a member of the club, and they will be examined and end up with someone who needs those glasses. There is quite a bit of demand.”
If people don’t know a member of the Lions Club and would like to donate glasses or if someone is interested in joining the Meeker Lions Club, they can stop in at any meeting, Allen said.
The club meets every Tuesday at 6:30 p.m. During the winter, the club meets at the exhibition hall at the Rio Blanco County Fairgrounds, and, during the summer, the group meets outdoors at Meeker Town Park.
“We are always looking for new members,” Allen said. “I believe the Meeker Lions Club is a group of good people doing good things for the community. If anyone is interested in joining us, we would love to have them stop in at any one of our meetings. We welcome men and women as each person has something to add to the group.”
Once the club carries out a fundraiser, one has the feeling the money raised doesn’t stay in the bank account very long.
“We are helping out constantly,” Allen said. “We purchased playground equipment for town parks years ago and have done a number of public projects during my nine years as a member. As a matter of fact, we are currently looking for a major project to undertake, and we are taking suggestions if anyone has an idea.”
President of the club for the past two years, Allen was recently sworn in as the newest member of the Meeker School District Board of Trustees.
“I thought about going for a third year as president of the Lions Club, but I thought as a former educator I might be able to help the school board,” he said. “I think I can offer a unique outlook on the board and am looking forward to the challenges there.”
Allen taught music and the gifted and talented program within the Meeker School District for 26 years after teaching in Paonia for two years.
He earned his degree in instrumental music at Western State College in Gunnison. Since moving to Meeker, he taught instrumental music and choir primarily while also teaching language arts and other classes as needed.
Allen currently owns and operates a noxious weed eradication business, contracting with area ranches, mines, etc., to get rid of noxious and invasive weeds in the area.
Allen and his wife, Joy, have five children, including: Zack, who lives in Meeker and works at Colowyo; Sarah, who owns a flooring business in Laramie, Wyo.; Carrie, a teachers in Grand Junction; Brenda, an administrator at a beauty college in Grand Junction; and Meghan, a State Farm Insurance agent in Grand Junction. There are also eight grandchildren.

MEEKER | At long last, Meeker has a bakery again, and residents have been very receptive. “The support from the community has been overwhelming. We’ve been so busy,” said Janice Millar. The White River Bakery, […]

Facelift for one of Meeker’s iconic storefronts

MEEKER | When it comes to makeovers, who’s better suited to perform one than a beauty salon? In 2013, Meeker native Jan Nye took on the challenge of giving a facelift to the iconic building […]