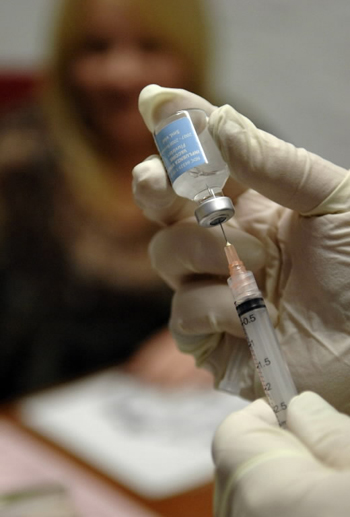 MEEKER I Mickie O’Neal remembers the last time she saw her son.
It was two weeks before he died.
“I tried to visit him every two weeks,” said O’Neal, who lives in Meeker and works as a speech aide for the school district. “I would talk to him. Tell him what everybody was doing. People would call, and I would put the phone up to his ear so he could listen.”
Calvin “Bubba” O’Neal died Sept. 19 of the H1N1 disease.
“On the death certificate, it says he died from complications from the swine flu,” Mickie O’Neal said.
Her son celebrated his birthday July 30 when he was in intensive care at a Salt Lake City hospital. He was 29 when he died.
“They called and said, ‘You need to get here fast,’” O’Neal recalled of the day her son died. “We were on our way, en route from Salt Lake, when he passed.”
O’Neal’s son left behind a wife and 10-year-old daughter.
“They’re struggling,” O’Neal said. “It’s very hard for them.”
O’Neal said her son first got sick at the end of May.
“He went to the doctor in Salt Lake, and they thought he probably had a virus,” O’Neal said.
When he didn’t get better, his younger sister, who is a nurse, urged him to go the emergency room, O’Neal said, because he was having trouble breathing.
“They diagnosed him with pneumonia,” O’Neal said. “His sister told him he needed to tell the doctors he could have been exposed to the swine flu through students at his daughter’s school. They swabbed him, but they said nothing about the swine flu. All they said was he had the Type A flu. He called me, maybe six or seven hours later after seeing the doctor, and he could hardly speak on the phone.”
Again, O’Neal’s son returned to the ER. He was put in intensive care.
“Within 24 hours in ICU, he was hooked up to life support,” O’Neal said. “They put him in a drug-induced coma, because he was fighting the trachea tube.”
While in intensive care, Bubba was tested for the swine flu.
“At some point, when he was in ICU, they tested him for swine flu,” O’Neal said. “They tested him for everything they could think of.”
O’Neal said within the four days it took for her son’s swine flu test to be analyzed, his condition deteriorated.
“During that period, my son went from bad to worse,” O’Neal said.
When the test results came back confirming her son had H1N1 disease, he was transferred to the University of Utah Hospital.
“They put him in an oxygen-contained room,” O’Neal said. “He crashed. They put him on a ventilator. His lungs became brittle. They cracked and collapsed and his heart stopped. He crashed three times.”
O’Neal said her son ended up at a nursing facility in Bountiful, Utah, which is where he died.
“His heart never fully recovered,” she said.
Throughout the ordeal, O’Neal said she could sense her son was declining rapidly, but she felt helpless to do anything.
“I did not know where to turn,” O’Neal said. “He was slipping away, but there was nothing I could do.”
O’Neal said she doesn’t blame the doctors who treated her son, but she questions the efficiency of the health care system in identifying and treating those infected with the swine flu. She said she learned more about the disease because of what her son went through.
“I did not know that the swine flu will attack your vital organs,” she said. “Everything just starts shutting down. We live in such a high-tech country and we know little or nothing about swine flu. It could have been different. If they had known right then and there he had the swine flu, they could have given him (the antiviral drug) Tamiflu. That’s what irks me the most. It took four days (to get the H1N1 test results back), and those four days are critical.
“They did put him on antibiotics, because they weren’t sure what was going on with him. He first got sick throwing up and had diarrhea. Then he developed the cough and cold. After that … it just went right into pneumonia,” O’Neal continued. “It all happened within one week from the time he first had symptoms until when he ended up in ICU. They did everything they could. It just happened so fast.”
Before he became sick, O’Neal said Bubba had been in good health.
“My son was such a vigorous boy,” she said. “He was a little overweight, but he didn’t smoke.”
After Bubba died, the family had a barbecue in his honor, which is something he would have liked, O’Neal said.
“He wasn’t a fancy person,” O’Neal said of her son, who drove a cement truck for a living. “His favorite thing was having friends and family around and having a barbecue. Next spring, we’re going to go to California (where Bubba went to high school) and have a service there with all of his classmates.”
O’Neal moved from Utah to Meeker two years ago, after her husband died. She said the support of friends here has helped sustain her during the loss of her only son.
“Everyone has been so nice to me,” she said. “Everyone has been wonderful.”
While H1N1 is a type of influenza, and is treated as such, based on her son’s experience, O’Neal said, the disease should not be minimized.
“Don’t make light of H1N1,” said O’Neal, who wrote a letter to the editor that appears in this week’s Herald Times. “It can be extremely dangerous. That’s why I decided to sound off. Most people have no idea what it’s about. I just hope people will pay attention.”

Listen to this post There has been quite the murmur of political opinions in the Rio Blanco Herald Times as of late. More recently of those who lean to the left.

Listen to this post MEEKER I Property owners (or the individuals responsible for the property) are required to cut and remove weeds and brush, including weeds in adjacent alleys and public rights-of-way between June 10-20 […]