That was the summation from every agency that deals with mental health crises represented Monday at a meeting in Rangely convened by the Herald Times and The Colorado Independent to discuss the status of mental health, policing and communication in Rio Blanco County following the Nov. 7 publication of “Through the Cracks: A stranger, a police shooting, and a rural town’s silence”. The collaboration between the HT and The Independent told the story of last year’s officer-involved shooting of Daniel Pierce, who suffered from untreated paranoid schizophrenia.

Among the 30-40 or so in attendance were former Rangely police lieutenant Roy Kinney, the officer who shot Pierce, and Pierce’s widow Debra, from Missouri. The two met for the first time in person just before Monday’s meeting.

Debra shared some of the symptoms of Daniel’s mental illness from her point of view, and Kinney spoke about his experiences with Daniel prior to the evening of Dec. 10, 2018.

“I don’t hold anything against any of you,” Debra said of Kinney and the other officers involved in her husband’s death.

Raggio said one of the hallmarks of paranoid schizophrenia is the patient’s inability to realize that the delusions they are experiencing are not, in fact, reality, making it difficult to get the patient to maintain treatment. Debra Pierce described “cracks” in the mental health care system in Missouri, California (where Daniel stayed with his mother) and in Colorado. 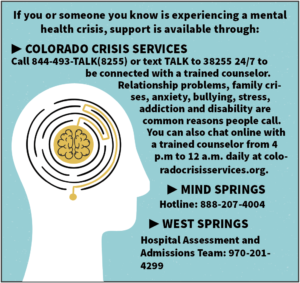 Hamblin and Mazzola discussed mental health training for law enforcement. Hamblin said almost all of the training is done on the Front Range, increasing costs and requiring more time away for officers.

Raggio and Huber discussed the difficulty of having a limited number of local providers covering such a large area, but said they are committed to a two-hour response time for crisis calls. The expansion of West Springs Hospital last year to 64 beds has improved the situation, Raggio said, but West Springs is still the only psychiatric hospital between Denver and Salt Lake City.

According to data compiled by Mental Health Colorado in 2018, Rio Blanco County has approximately a third of the average number of behavioral health providers statewide.

Residents are encouraged to write letters, call, and/or email state elected officials (see addresses below) and let them know there’s a need for increased funding and support for mental health resources and training. 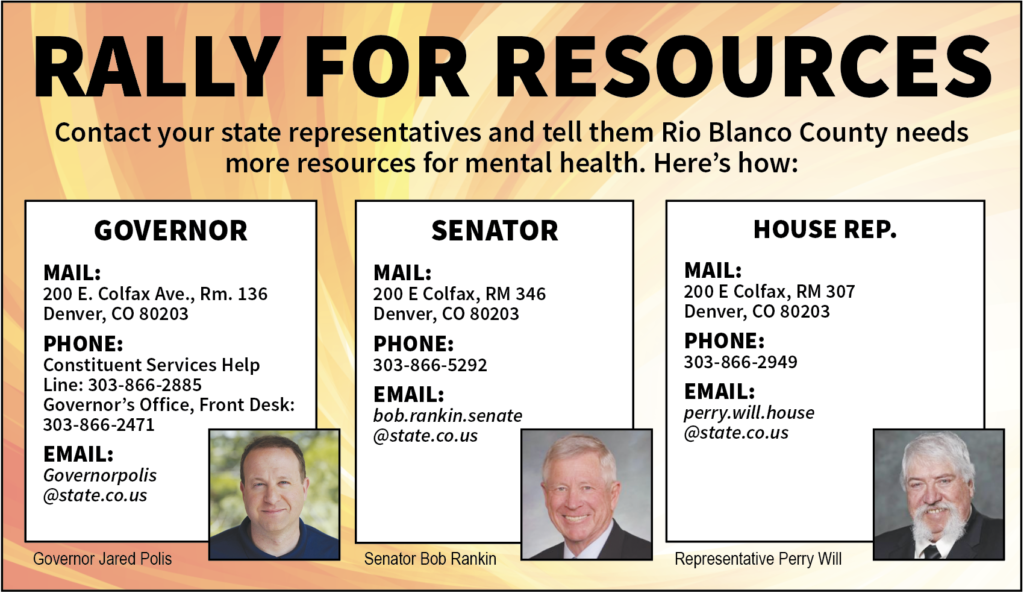 What a wonderful emergency response team Rangely has! Thank you Josh for turning around to help us when we had a car accident on the 20th. You got the ball rolling by calling our accident […]

RANGELY | The 2010 prom will be Saturday in the Rangely High School gym. The grand march starts at 8 p.m. The prom theme is “Float Away With Me.”