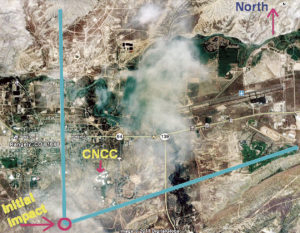 RANGELY | Strong, damaging winds from a thunderstorm struck the town of Rangely in northwest Colorado on the evening of June 28. A National Weather Service (NWS) storm survey of the Rangely area determined that a (dry) microburst had occurred.
A dry microburst is a type of concentrated thunderstorm outflow wind that is caused by evaporative cooling of the air near the base of the thunderstorm, where rain evaporates as it falls into a much drier layer of air.
The initial impact point of the microburst was located just southwest of the Colorado Northwestern Community College (CNCC) campus, with the greatest damage in Rangely having occurred on the campus. Based on the NWS storm survey, estimated winds in that area ranged from 70-85 mph. A significant portion of a roof on North Nichols Residence Hall was lifted up and blown completely over the structure. Debris from North Nichols Residence Hall was found up to a quarter mile away on the northeast end of the campus. A dozen mature Russian Olive trees on the campus were uprooted and large limbs and branches were snapped off many other trees. One of the uprooted trees fell against the CNCC president’s house, causing some damage to the roof. Other wind damage to property on the CNCC campus was observed during the NWS storm survey.
Further away from the CNCC campus, additional wind damage also occurred, although it was generally a little less destructive than the CNCC damage, with estimated wind gusts ranging from 55-70 mph. There was an observed wind speed measurement of 54 knots (62 mph) from the AWOS at the Rangely Airport (4V0) where a section of wooden fence was blown down and a swamp cooler blown from the roof of the terminal. Many trees within the town of Rangely were uprooted or lost large limbs or branches. A few trees were snapped off a few feet above the ground, including ash trees with trunk bases generally ranging from 6-10 inches in diameter. A wood frame carport was ripped off an apartment building on East Main Street. A large trampoline in the northeast part of Rangely was blown into the air and landed about 75 yards away in a neighbor’s yard, and a 400 lb. water tank was blown across a road.
All of the observed and reported wind damage was consistent with a straight-line convective wind event, as all of the debris was generally pointed to the northeast, with the directions ranging from north-northeast to east-northeast.
A similar microburst in Meeker occurred during the Meeker Classic Sheepdog Trials several years ago.

Rangely volleyball team is among league favorites in Western Slope

Listen to this post RANGELY I Coach Jimmie Mergleman has no problem with other people expecting a lot out of her team. She does, too.

Listen to this post RANGELY I The Panther cross country team rolled into Cortez on Friday evening in anticipation of the regional championships to follow on Saturday morning. It was a balmy 46 degrees and […]

Listen to this post RANGELY I Colorado Northwestern Community College (CNCC) and Chevron Energy Solutions (CES) will commemorate the completion of the Rangely Campus Energy Efficiency Upgrade Project with a ribbon-cutting ceremony on Thursday, Nov. […]