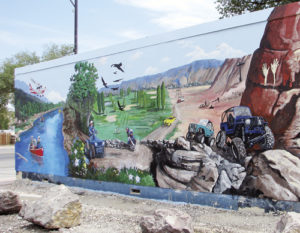 RANGELY I Until the 1980s, when Dawna Wardell first painted the west wall at 117 W. Main St., the building was serviceable but not noticeable. It housed The Insurance Office in the 1960s and the Family Video store in the ’80s and ’90s. Wardell’s mural, a mountain scene depicting deer and elk, added something to the wall’s bare face.
In 2007, when Raven Realty owner Karen Reed bought the building, she liked the art that came with it. The mural, though a bit faded, “was still beautiful.”
Then one morning last February, she arrived at the office to find a semi-sized hole in the wall. A semi truck had backed into the structure and left, after caving in the cinder blocks and damaging both wall and mural beyond repair.
“I didn’t want to just not have the art there,” Reed said. “Having a mural uplifts the community and makes it nicer.”
So Reed started the process of creating something new. To get ideas for the mural, she asked for community input and brainstormed ideas with family and friends.
“We wanted to incorporate the recreational activities we have in Rangely,” Reed said. “To let people know who are driving through it’s not just an oil town that’s about all work and no play.”
While searching for muralists online, she found Grand Junction artist Lee Bowerman. Bowerman, a commercial sign painter for 35 years, has found his niche on the Western Slope, where he does both easel painting and murals but has “a special affinity for doing big work outside.”
Bowerman has painted Italian walkways, 1940s Main Street scenes, teepee villages, even Johnny Cash surrounded by his Ghost Riders. Joined with his experience are skills learned at the former Mesa State College, the Rocky Mountain School of Art, and a “Famous Artists” correspondence course founded by Norman Rockwell and other artists.
Even with that kind of a background, Bowerman said that this project presented a “giant challenge.”
“What was unusual was having to show so many different things,” he said. “I tried to tie the whole mural together with the mountain range and the road that comes out of the oil field. The wildflowers were a gift to Karen. And the ravens — she said we had to have those. Otherwise, it wouldn’t be Rangely.”
The mural features canoeists floating down the White River; an airplane wielding Colorado Northwestern Community College’s Spartan mascot; two rock crawlers scaling a tenuous ledge; and Canyon Pintado rock art, among several other icons of the area. It also holds a surprise.
“Bud Striegel approached Lee and asked if he could put his Studebaker in there,” Reed said. “He asked me too, and I said ‘sure.’ Bud does a lot for the town.”
Bowerman obliged, noting that not only did he paint the car into the mural; he has also worked in the hot-rod shop that is currently turning the 1950 Studebaker body into a custom hot-rod.
Bowerman said that several Rangely residents supported him during his month-long stay in the area.
“I had such wonderful cooperation from the people of the community and from the Reeds,” Bowerman said. “Norm Hall was an absolute gift to me. He came by for coffee almost every day and kind of showed me around. I had coffee at the (Main Street) Coffee House daily. I got to know (owner) Cheri Perry and all of her gorgeous girls.”
The mural, which is expected to last at least a decade, has already attracted notice. German tourists stopped and photographed the scene as the scaffolding was coming down, emailing Bowerman the images.
“When you’re finished with a job, you stand back and look at it, and think, ‘Should I stop now or add this or change that?’” Bowerman said. “On this one, I looked at it and thought, ‘You know what? I think I’m done.’ I knew I’d just be changing it, not improving it, if I kept going.”
Photographs of Bowerman’s work can be found at www.bowerman art.com and at www.finda muralist.com, where you can click on “Colorado” and select Bowerman’s link.

Listen to this post MEEKER | Ben Quinn, art teacher at Meeker High School, has recently taken on a project at the Meeker Recreation Center to create a mural on the north wall of the natatorium. […]