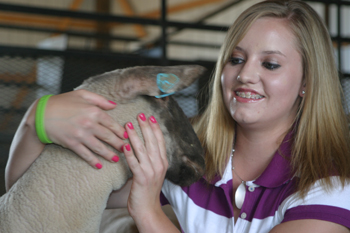 MEEKER I Morgan Neilson isn’t afraid to aim high.
The senior-to-be at Meeker High School set her sights on becoming the state 4-H president.
Mission accomplished.
Neilson, 17, was elected to 4-H’s highest office at the state conference in June at Colorado State University. She was one of three candidates vying for the position.
As part of the process, she had to give a speech, design a campaign poster and participate in an on-stage interview before her fellow 4-H’ers. Each of the three candidates took their turn answering questions, but they couldn’t hear the other candidates’ answers.
When the interviews were over, the three candidates waited by themselves for the votes to be cast.
“We made some small talk, but we were so nervous,” Neilson said.
Finally, after the votes were counted, Neilson was declared the winner.
“I was so excited, I was shaking,” she said. “It was pretty cool.”
Mary Strang, Meeker School Board president and local rancher, said Neilson being elected state 4-H president was a big honor.
“This is a significant achievement and one which hasn’t been earned by a Meeker candidate since Tony Seely served back in the ’80s,” Strang said. “Morgan is an outstanding student leader in school and 4-H and a super kid.”
Later that night, after the election, Neilson was officially inducted, with the outgoing president presenting her with a candle — sort of a passing of the torch — and words of advice.
“He said, ‘Life is 10 percent what happens to you, and 90 percent of how you react,” Neilson said.
Neilson reacted in typical fashion — she was ready to go to work.
As the new state 4-H president, she hopes to use the platform to encourage more youth to become involved in the program.
“I think it’s an opportunity to grow and get more kids involved in 4-H,” she said. “This way, I can impact kids to get involved. I like just helping out (younger 4-H’ers) and encouraging them, even if they don’t win. A lot of it is like mentoring; you don’t realize the people you impact.”
Neilson, the oldest daughter of Paul and Renae Neilson, has been involved in 4-H for about 10 years. She’s also involved in FFA, serving as chapter and district president.
“I’ve been showing sheep since I was 8,” said Neilson, who was District 11 president last year and secretary of the state board.
Raising sheep runs in her family.
Her grandfather — Nick Theos — is a longtime Rio Blanco County sheep rancher.
“My grandpa, my mom’s dad, has a big herd of sheep,” Neilson said.
Neilson has also shown pigs at the county fair. While she does both — show sheep and pigs — she likes showing sheep better.
“Lambs have more personality, but pigs are cool, too. The difference is, pigs do what they want, and sheep do what you want them to do, or at least some of them do,” Neilson said. “Sometimes they all have a mind of their own.”
The Neilson girls — Morgan and her younger sister, Taylor — started showing pigs last year at Taylor’s suggestion.
“My sister wanted to show pigs,” Morgan said. “Since she did, I decided to, too.”
Morgan won her pig showmanship class at last year’s Rio Blanco County 4-H Fair.
“That was exciting, because we didn’t expect that,” she said.
The two sisters work together taking care of the animals and getting them ready for the fair.
“We spend a ton of time together with the animals in the summer,” Morgan said.
Last year, Taylor won the Grand Champion Market Lamb at the 4-H fair, and Morgan had won the title the two years prior to that.
“I won it back-to-back years,” Morgan said. “Hopefully we can keep it in the family (this year).”
Even though she will be a senior at MHS, Morgan will have one more year to compete in 4-H.
“I’m 17, but I’m 16 in 4-H years, because my birthday was seven days after the (Jan. 1) cutoff,” she said. “So, the year after I graduate, I can show again.”
Morgan hasn’t decided yet what college she’ll attend — Texas A&M, Kansas State, Colorado State University and Cal Poly are among the schools she’s considering.
Besides her 4-H duties, Morgan will be president of the MHS Student Council. She likes being in leadership positions.
“It’s my favorite thing, I think,” said Morgan, who is a National Honor Society member and plays volleyball and basketball. “I like organizing stuff and planning everything, and then watching how it turns out.”
As president, she will be in charge of planning the 4-H conferences, including the state meeting.
This summer, Morgan attended an FFA national leadership conference this summer in Washington, D.C. It was her first visit to the nation’s capitol and her first experience seeing how the political system operates.
“I would love to go back and work there someday,” she said. “I think that would be neat. It would be neat to be a congressman or a senator.
“Or the president,” she added.

Enclosed is my check for my annual subscription to the Herald Times. I considered whether or not to renew my subscription for several weeks This is mainly because, I don’t find much newsworthy in the […]

Chamber gears up for project

Wonderful sunshine, blooming flowers, green grass and fun community events go hand in hand! With the welcoming of spring and summer, the Meeker Chamber of Commerce is gearing up for many events.

A long history of hard-working people

MEEKER I Joe and Evalyn Carstens have grown up, worked, owned a business, and raised a family in this area. They come from a long history of hard-working people and carry on that tradition. Facebook […]