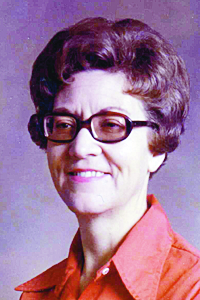 Beryl Ann Taylor passed away quietly from natural causes at Family Health West in Fruita, Colo.
She was born in Lapoint, Utah, to Deltha and Sherman Taylor. Typically at that time, she was assisted into the world by her maternal grandmother in a family home.
When Beryl’s father contracted for the mail route between Meeker and Rangely, he moved his family to Meeker, where Beryl completed her education in the Meeker school system. She was graduated from Rio Blanco County High School in 1951, being an adept and honored student.
Of particular interest and talent for Beryl was music. She excelled in singing, and the Girl’s Octet was sought for four years for performances in competition and pleasure by organizations and clubs in the area.
Her bookkeeping ability provided employment for many years as she worked in the family store, the Independent Lumber Co., the Rio Blanco County Treasurer’s Office, Nichols’ Sales and Service and Jirak’s Drug Store.
In 1968, Beryl adopted a baby girl she named Kimberly Ann, who added love, pleasure, diversity and parental responsibility to her life.
Beryl was an active member of The Church of Jesus Christ of Latter day Saints, and as such provided leadership, teaching and assistance to the youth in the Primary Association and Mutual Improvement Association.
Her deteriorating health resulted in placement in the Walbridge Memorial Wing in the fall of 2006. She was subsequently placed at Family Health West in 2011.
She was preceded in death by: her parents; two sisters, Twila Taylor and Helen Stephenson; and one brother, Sherman Lynn Taylor. She is survived by: daughter Kimberly (Virgil) Woodward and grandson Jaden; sisters Nyla (Dick) Merriam and Shirley Taylor, brother Bryon (Sharon) Taylor and a host of nieces, nephews and cousins.
Beryl packed a lot of living into her 80 years and she left her mark on many people’s lives.
Rest In Peace memorial contributions may be made to the Walbridge Memorial Wing in care of Grant Mortuary.

Listen to this post MEEKER | Need help with Microsoft Excel and/or PowerPoint? If so, register now at CNCC Meeker Center for these spring classes. PowerPoint is scheduled for March 16 and 23 and Excel […]

Listen to this post Local dentist Dr. Charles Vandiver (far right) standing next to his wife Dee Anna, credits his wife and staff for being able to maintain a modern dental office in Meeker for […]

Listen to this post MEEKER | Pioneers Medical Center Home Health will be offering its monthly foot care clinic Tuesday, July 26, at 10 a.m. at The Pines.