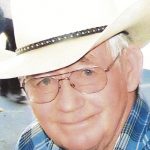 Robert Lee Bivens was born on June 4, 1930, in Crook, Colo., to Ben Edgar Bivens and Helen Ruth Simpson Bivens. Bob passed away at the Walbridge Wing on Oct. 10, 2016, in Meeker, Colo. Bob moved to Meeker in April of 1943. He lived with his great-uncle Edgar and great-aunt Ruth Campbell on a small ranch up Little Beaver. Bob attended school at the Coal Creek School, graduating from Meeker High School in 1948. He was drafted into the Army in January 1951. He was sent to Germany with the armored division as a tank mechanic. He received an honorable discharge in December 1952. Returning to Meeker he worked for his uncle Ed at the Meeker Feed Store. He worked on many ranches throughout the valley. Some of the ranchers he worked for were Bill and Lula Hall on Strawberry and Lewis Livingston on the Yellow Jacket Ranch. In October 1959, he met his future bride as they were both riding horseback on the Miller Creek cow permit while gathering cows to bring them back to the ranches for the winter. The full October moon cast a spell on his heart when he met Kay Barney. They were married on June 8, 1961. Bob then worked for Grant Nielsen, Elige Joslin, Art Lammers, Jack Russell, George Russell and Alan Rogers. Bob and Kay were there for 23 years working and raising their children. Ranch life is the best place in the world to raise kids. Bob was always supportive of his wife and children as they were always involved in 4-H, church activities, sports, school and whatever else they wanted to take on. Bob is one of the last cowboys to ride the cattle permits on Miller Creek, Burro Mountain and Elk Creek. In 1991 Bob and his family moved into town, where he worked for Meeker city park until he retired. Bob enjoyed hunting and fishing and being with his family. One of his favorite yearly trips was with the Young Farmers group started in the early 1950s by Paul Starbuck, Meeker High School ag teacher. Bob belonged to Meeker Lions Club for 36 years. He will be remembered for the delicious roasts that were served at many Lions events. Bob enjoyed the camaraderie of the Lions. Bob was a loyal member of the Meeker VFW. He enjoyed riding in the 4th of July parade with the VFW. He was always willing to serve in any capacity they asked. Bob leaves behind his loving wife Kay of 55 years, his six children and spouses: Pamela Padgett (Glenn), Thomas Bivens (Janet), Edgar Bivens (Judy), Nancy Reardon (Kevin), Lisa Ruckman (Ron), Molly Mendoza (Mike), 18 grandchildren, five great-grandchildren with two more on the way. He was preceded in death by his parents, two sisters, Ruthie Kracht and Norma Bivens. He is survived by his sister Jean Simmons of Sterling, Colo., brother-in-law Billie Kracht of Meeker, and many nieces and nephews. Hi family and friends will miss him very much but he is now at peace. His gift of love lives on in all that knew him. The graveside military service will be held at Highland Cemetery in Meeker, Colo., at 11 a.m. on Oct. 22, 2016. If the weather is bad the service will be held at the LDS Church at 903 Third St. Please send donations to the Meeker Lions Club.