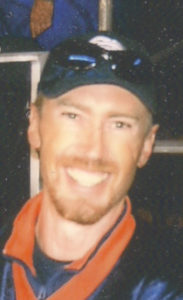 Christopher (Chris) Holthus was born of the flesh on Feb. 1, 1971, in Denver. He passed away Valentine’s Day, Feb. 14, 2010, and was born of the spirit on this day. He fought a diligent battle with lymphoma for one and one-half years prior to his death.
Chris leaves behind his son, Caden Holthus, 5, his “Little Man,” Jamie Abell and her children Taylor Rogers and Shelby Rogers of whom he was like a father to for several years. They currently reside in Arvada. He is also survived by his parents, Dennis Holthus of Denver, Cherlyn and Ken Cates of La Quinta, Calif., and Michael Lee and Linda Blagg of Meeker. Sisters, Candice (Holthus) Benson residing in Minnesota, Diana Jones of Castle Rock and Dawn Eichman of Meeker and brother Justin Blagg also of Meeker. He was an uncle to many nieces and nephews. He is also survived by one grandparent, Joseph Deeds of Denver and several aunts and uncles.
Chris loved the outdoors and spent every chance he got enjoying it. Whether it was fishing, hunting, four-wheeling or trimming trees, he thoroughly absorbed God’s gift of nature. After living in the metro areas of Denver and Palm Springs, Calif., he made his home in Meeker in May 2008. This allowed him to pursue his love of the outdoors. Chris took many photographs and was known to just shoot pictures out of the window on the car rides home from St. Mary’s Hospital to Meeker, which often left you shaking your head and giggling. He had a wide array of photos of his family, most of all his son Caden, and took every opportunity to share them with everyone. His love of music was widely known by his friends and family. He loved most genres and attended any concert he was given opportunity to. He had a beautiful singing voice, which he used at karaoke and at church. This voice was damaged by surgeries related to his neck injury and cancer biopsies. He was frustrated by this at times, but still mouthed the songs at church with his family. He loved to ride his father Michael’s Harley with his family and friends, especially runs for fund-raising. You could see his smile a mile away on the Harley.
He had several occupational interests, including loss prevention, which earned him the nickname “Hawk” as he could spot the minute details of people’s body language and facial expressions making him exceptional at his job. He worked as a collections agent and in the construction field. He injured his neck severely while working construction and was trying to get back to work by having another neck surgery when his lymphoma was found during some testing prior to surgery. He also was graduated from the police academy in Glenwood Springs and ESI (Executive Security International) in Aspen. He was graduated from high school in Colorado Springs and attended some college, including Mesa State University in Grand Junction.
Chris was well loved by all who knew him. Who could ask for more than to be well-loved? His concern for others was continual even throughout his cancer treatments and time prior to his end of life. He prayed for others, always. He was available with a helping hand even at times when his health shouldn’t have allowed it. His infectious smile, snicker and bright, beautiful eyes drew people to him. His sense of humor will always be remembered by all who knew him. He could imitate anyone and often did. The stories relating to his humor are endless.
Chris was very thankful for the people in his life and showed affection continually to his family and friends. He was determined to make a difference in everyone’s life who he came in contact with and expressed that hope. He loved his church family and frequently leaned on them for advice and guidance throughout his cancer battle. He was very fond of and thankful for Dr. Joanne Virgilio and her wonderful staff. The many employees of St. Mary’s Hospital where he spent so much time. They were always there for him and gave him the best care possible. Also, for Dr. Albert Krueger and his medical assistant Rita Bird at the Meeker Family Health Center. Also, the Denver Hospice, which provided care alongside Jamie Abell in his final weeks.
Chris was a proud member of the church at Meeker. He also may be remembered as a volunteer for the Meeker Lions Club during several Fourth of July celebrations and the Giving Tree project in Meeker at Christmastime.
Chris’ funeral service was held at the Church at Meeker on Feb. 19, 2010. Presiding over the service was Chris’ pastor, Mike Dinwiddie, and Jim Ellis. Solos were graciously performed by Trina Cox and Steven Deeds. Nancy Amick played the piano beautifully, as always. The church family served a wonderful dinner following the service, giving everyone an opportunity to visit and watch a video slide show of Chris from the time of his birth to just weeks ago.
Memorial donations can be made to Mountain Valley Bank, P.O. Box 218, Meeker, CO 81641 to the Chris Holthus Memorial Fund. They can also be sent c/o Linda Blagg, P.O. Box 56, Meeker, CO 81641. He was fond of many other charities, including “Cowboy Christian Ministries,” Fred and Elaine Ellis’ ministry in Meeker and Twin Peaks Bible Camp in Collbran. Any charity of your choice would be appropriate, if you so choose to donate in his name.

Listen to this post Beloved mother of Stephanie Anderson (Eason), Stephen Eason, James E. Bolles Jr. and Everett Bolles. Preceded in death by her husband, James E. Bolles Sr. As per her wishes, there will […]

Listen to this post For the past six years, Mary Cunningham, who works at the U.S. Forest Service office in Meeker, has celebrated International Migrating Bird month by taking Meeker Elementary School students on field […]