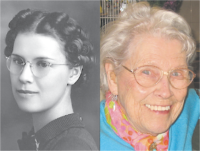 Ida Elizabeth Pahlke, a resident of Boulder for 63 years who was known for her welcoming arms and welcoming heart, died last month of the inevitable effects of 101 years of living. When Elizabeth, as she preferred to be called, was born in Hastings, Nebraska, to Charles Edward Yost and Clara Mary Yost (Drollinger) on Feb. 25, 1919, the Spanish flu pandemic still raged around the world. Perhaps Elizabeth’s survival of that first pandemic and of a later infection with smallpox were early signs of the resilience  that would sustain her through a life that included earning a living by teaching, farming, and running a laundry; raising five children and losing one; enduring multiple joint replacements and congestive heart failure; celebrating the births of children, grandchildren, and great-grandchildren; and suffering the loss of so many friends and relatives over the long years of a century.

Before she was 5, Elizabeth and her white pony, Snowball, were all over the place, tagging after her father and brother. But when she got old enough to attend the local country school, she rode the two and a half miles on a feistier pony named Daisy, a daily trip that produced a story that Elizabeth enjoyed relating to the pampered youth of later generations. “I knew Daisy was afraid of train noise, so I went back to my friend Betty’s house a little ways from the crossing and planned to stay there until the train moved on. Big brother [Edward] told me to go on. He thought I’d stay too long playing. As I neared the track, the engine blew off steam and Daisy took off on a dead run. All I could do was hang on the reins and mane. As I neared the highway, I prayed there would  be no cars and Daisy would slow down. But, no she kept on at a fast run, but she did stay on the gravel shoulder on the left side of the road. She slowed a bit but I still couldn’t get control. She turned up the driveway and, wonder of wonders, stopped at the house gate so I slid off and let her go to the barn.”

Moving from country school to high school was something of a shock for Elizabeth. From being in a class with only two students she moved to a class with more than 100. Country kids were placed wherever there was room, so she ended up “with a bunch of jocks,” in spite of having tested at the top on her exams. By 10th grade, though, she was with more like-minded students in pre-college classes, studying Latin, government, history, advanced Math, and journalism. Elizabeth didn’t have money for the dues and formals of the Job’s Daughters activities that her friends enjoyed, but, as she says, “I was involved in 4-H, [so] I didn’t feel underprivileged.”

After high school graduation, Elizabeth attended Hastings College, living at home until, with work study earnings, she was able to get a room in town. With that move, she was able to have a bit more social life and made some good friends among the people she worked with at the library. Originally, she planned to begin teaching after two years of college but, thanks partly to her leadership in 4-H, she won a full tuition scholarship between her sophomore and junior years, and was able to finish college, cum laude, with a double major in education and home economics. That was in 1941, a few months before the attack on Pearl Harbor. Many years later, we sat with Elizabeth as she turned the pages of her college yearbook, pointing out the pictures of all the boys who died in the war.

After teaching for a time at Juniata, a few miles from her home town of Hastings, Elizabeth took a job as a home economics general science teacher at Sutherland. After two years there, she moved with her parents to California, and taught 30 first-graders in Coachella.

In October 1945, Henry Pahlke, a man she had known in Nebraska, came out to visit her and proposed marriage. Elizabeth accepted, and after a June 1946, wedding in California, the new couple moved back to Nebraska. As she put it, “I said I’d never be a farmer’s  wife, [but] never say never.” Indeed, the couple farmed for the rest of the 1940s and into the 1950s, moving from place to place around Nebraska and having children as they went. Their final move, though, was to Boulder, Colorado, where they hoped that the better climate would alleviate son David’s asthma, and that a new occupation would alleviate the financial struggles that came with farming. Elizabeth and Henry bought a laundry business, the “Launderette,” located on Pearl Street, and, after a few years, a house located a block from Mapleton Elementary.

And the family continued to grow. Elizabeth told a story of sitting one Sunday in a church pew and suddenly realizing, “Oh, gosh! I’m pregnant again,” with, as it turned out, a daughter. After four boys, finally a daughter! That completed her immediate family, but because the house was always open to the friends of the five children, she never knew how many plates to set for supper before actually counting noses. With Mrs. Pahlke, kids knew that they had found a safe harbor.

When the Pearl Street Mall was built in Boulder, the owner of the rented building that housed the laundry decided to sell, leaving no place for Elizabeth and Henry to conduct their business. Not knowing just what to do, they first auctioned off the laundry equipment, then found a different laundry for sale in Brighton. In that new location, thanks to the men working locally on oil pipelines, they had a better business than in Boulder. As Elizabeth said, “We managed.”

About 1980, they sold the business in Brighton. “We never did make a lot of money [off the business], but we managed to keep you kids going.” That they certainly did. Partly because their investments were beginning to pay off, but mostly because the children were no longer sponging off their parents for college expenses, Elizabeth and Henry were finally able to retire.

Even as a young college student, Elizabeth had taught Sunday school, so becoming an active member of the Methodist Church after moving to Boulder was a natural continuation of her faith. As she contributed to the church, the church gave back, providing Elizabeth and Henry with friendships that they maintained for the rest of their lives. Elizabeth was an active member of UMW Circles at both the First United Methodist Church and at Mountain View United Methodist Church, and of P.E.O, which she attended well into her 101st year.

In retirement, and with the kids gone, the big house on Maxwell Avenue began to feel more like a liability, so Elizabeth and Henry sold it in 1999 and moved two miles across town to an independent living facility for seniors called “The Atrium.” Living there, Elizabeth remained sharp as a tack, positive, social and engaged with the world, even in a time of life and a place where loneliness can be hard to avoid. Well into her 80s and 90s, she went on cruises and traveled with her friends and daughter, carefully compiling albums to memorialize each trip.

But the effects of time cannot be forestalled forever. In 2012, Elizabeth, by then 93 years old and a widow for 10 years, moved another mile into the Sunrise assisted living facility. There she enjoyed doing jigsaw puzzles, cryptoquotes, and crossword puzzles, and, with somewhat less pleasure, she learned to use tablet computers and cellphones. Perhaps we can attribute her active mind to the dozens and dozens of books she read each year. She also continued her work with P.E.O., recruiting candidates to take advantage of scholarships provided by the organization. As the many staff members, care givers, friends, and relatives who knew Elizabeth over the years will attest, this generous spirit was typical—she was always friendly, she was always kind.

Elizabeth lived a long time, long enough to welcome three great-grandchildren, including one named in her honor. But she could not live forever, and her life now passes into family history. Hers is a full and rich story, but a story cannot fill our hearts as her presence once did.

Although Elizabeth was born during one pandemic and left us in the middle of another, the true signpost of her life is the love she gave during the intervening century. To honor her memory, the family suggests donations to the P.E.O. Foundation, so that the women it  helps can continue to grow the love that formed the core of Elizabeth’s life. Make checks payable to the “P.E.O. Foundation” and mail them to “P.E.O. Foundation, 2700 Grand Avenue, Des Moines, IA, 50312.” Please indicate “Continuing Education” on the memo line.

A memorial service will be held when the current pandemic ends. Until then, fight sadness with grace and spread love with service. That is what Elizabeth would want us to do.

Listen to this post Given the times, it may come as no surprise that demand is up at Colorado West Regional Mental Health. Colorado West, which has its corporate headquarters in Glenwood Springs, serves a […]

Listen to this post MEEKER I The Meeker tracksters put together some of their best performances of the year Saturday in Kremmling at the Western Slope League Meet.