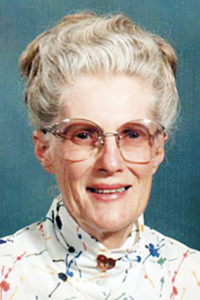 Floy Nigel Stanton-Weldon, 83, was called home to our Lord on Jan. 5, 2012. She was born to Guy Ransay and Floy Blackburn on Nov. 3, 1925, in Iliff, Colo. The family came to Moffat County when they bought a ranch on the east end of Blue Mountain, circa 1930.
She married William (Bill) A. Urie in 1946 in Craig, Colo., and they made their home in Maybell, Colo., where their four sons were born, and later moved back to what is now Three Springs Ranch where they raised the boys and continued their ranching tradition.
Nigel is survived by her husband, Dale Weldon, and four sons: Guy, Thomas, Stephen and Peter Urie, and eight grandchildren plus numerous step-grandchildren and great-grandchildren. She was preceded in death by her parents, brother Sonny, and sisters Katherine and Helen.
Nigel was graduated from Craig High School and earned a bachelor of arts in fine arts from the University of Denver. She taught school in Artesia (Dinosaur), Powder Wash Camp, Brown’s Park in Moffat County. Nigel started her schooling in a one-room schoolhouse and finished her teaching career in a one-room schoolhouse. She also taught piano to numerous children during her life.
Funeral services were handled by Callahan-Edfast Mortuary of Grand Junction. Pastor David Morton officiated at the Rangely First Baptist Church and graveside ceremonies as she was laid to rest at the Ramsey family cemetery on Blue Mountain on Jan. 10, 2012.

Christopher Shane “Kit” Karschner was born Oct. 9, 1989, in Rangely, Colo., the son of David Alan and Deborah S. (Caswell) Karschner. He was raised and attended school in Rangely.