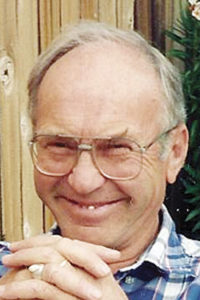 Frank Richard Wheeler was born Nov. 12, 1933, in Del Norte, Colo. He was the only child of James Robert and Dorothy Ellen Rhodus Wheeler. His mother passed away when Frank was 4-years-old and his father sent him to live with his aunt and uncle, Lucy and Felix Keiser, in Sargent, Colo. He lived with them until the summer after fifth grade when his father remarried. Frank went to live in Monte Vista with his stepmother while his father was in the Navy. In eighth grade his father divorced and Frank went to live at the “Thompson Place” with E.J. Thompson and his wife outside of Del Norte. He worked the ranch as a hired hand and developed his lifelong ethic of hard work. He sheared sheep, worked cattle, and dug and sorted potatoes before he ever got to high school. He went to the New Mexico Military Institute at Roswell, N.M. for his junior year of high school and graduated from Del Norte High in the class of 1951.
In 1955 he was inducted into the Army where he served at Fort Carson, Colo., in the military police. He was honorably discharged from the service in 1962.
He married Judy Herndon in April 1956 in Englewood, Colo. To this union were born two children, Dorothy (Dottie) in 1957 and David in 1959. They made their homes in Englewood, Boulder and Meeker, Colo. Frank worked for Colorado Central Power (later Public Service Company of Colo.), was a retail merchant, and worked for the Rio Blanco County Road and Bridge Department. He spent his free time fishing, hunting, shooting and camping He was an accomplished fly fisherman, tying his own flies and chasing the elusive rainbow and brown trout that inhabited the clear Rocky Mountain lakes and streams he loved so much. Winters meant snowmobiling and ice fishing at Avery Lake.
In 1984 he began spending his vacation time in Congress, Ariz., and moved to Arizona permanently in 1992. In April 2002, he married Marilyn Erickson, and they moved to Show Low. He was once again in the mountains he loved. Their home survived the Rodeo-Chedesky fire and many happy Memorial Day weekends were spent at there with their huge extended family. Frank was widowed in January 2005
He married Bobi Gambosh in March 2007. Together they traveled around, looking for a winter home. They found it in San Felipe, Baja Calif., Mexico. They became the quintessential snow birds, spending summers in Show Low and winters in Mexico.
Everywhere he went, Frank was always busy. He was a member of the Civil Air Patrol, various search and rescue units, was a member of the Unity Church and was never without a project in one state of completion or another. His vegetable gardens were the envy of all and he could can and freeze the harvest with the best of them.
According to him, his greatest blessings were his four grandchildren, Sam and Ben Wheeler and Tylar and Tori Talkington. He reveled in their achievements and was the proudest grandad that ever lived. When he spoke of their many talents and accomplishments, it was most always with the shimmer of tears in his bright eyes.
He passed away in San Felipe on April 7, 2012, at the age of 78. He was kayaking on the Sea of Cortez with his wife Bobi and they were lost at sea. He was, to the last, an adventurous and independent man.
A celebration of his life will be held at 6901 Queens High Rd. in Show Low at 2 p.m. April 28. In lieu of flowers, the family requests donations be made to your local search and rescue unit in his memory.

Rayola returned home to her Heavenly Father on July 5, 2014. She continually taught us by her example to love others unconditionally, to always see the best in others, to work hard and to endure […]

Kyle Lee Smithey, 21, was killed in an auto accident on Colorado State Highway 64 on Tuesday, June 17, 2014. He was a resident of Dinosaur, Colo.