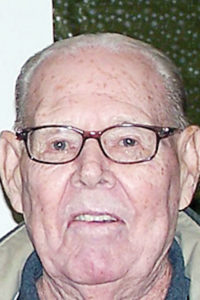 Fred Eugene McDonald, 87, passed away Sept 18, 2012, at his retirement home in Phoenix, Ariz. He was preceded in death by his wife, Jeannie McDonald (Wilson) in 2007.
Fred was born in Oakley, Kan., and served in France and Germany during World War II. Fred and Jeannie were married the day after he returned and he worked as an electrician in Denver and Colby, Kan., before moving his family to Rangely in July 1955, where he was line foreman for Moon Lake Electric.
During his life in Rangely, he served at various times as president of the hospital board, Rangely Chamber of Commerce, Lions Club, Quarterback Club, was announcer for all football and basketball games, coached his son and classmates in baseball from Little League to American Legion and performed electrical work for every farmer, rancher and many others in the area. But Fred was probably known by most as the best story and joke teller of his time.
He moved his family to Arizona in 1970. He was a line foreman for Arizona Public Service until his retirement in 1990.
Fred is survived by his three children, five grandchildren, and one great grandchild: Gary McDonald of St. Charles, Mo.(sons Connor, 20, and Lucas, 17); daughter Linda Lopez of Tempe, Ariz. (son Lance, 35, and granddaughter Lexa, 17); daughter Darlene Nease of Glendale, Ariz. (daughter Ashlyn, 27, and son John, 22).
Fred was given a full military funeral at the Arizona National VA Cemetery in Phoenix.
His presence and sense of humor will be missed by all who knew him.

Carl Fredrick Sorensen passed away June 16, 2008, from complications of cancer. He was born April 27, 1922, the second child of Michael and Beatrice Sorensen.