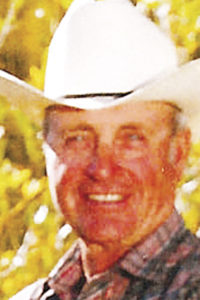 Homer F. Wilson was born Aug. 7, 1927, in Axial, Colo. He was the fourth-born child to Earl and Muriel Wilson. Homer had three older sisters and two younger brothers. In grade school he rode his horse to the one-room schoolhouse where his mother taught. Homer attended high school in Craig and was involved in basketball and football and enjoyed boxing at the armory in Craig and riding colts for Elmer Mack. Homer was graduated from high school in 1945 and attended Mesa State College until he was drafted into the U.S. Navy. In the years to follow he rodeoed, traded cattle and chased wild horses with his longtime friend Pat Mantle. On Oct. 5, 1956, Homer married Beverley Gentry. The newlyweds ran a sheep operation on Douglas Mountain. In 1959 Homer and Beverley had Shane and later that year moved to Mesa, Colo., where he got into the cattle business and ran cattle on the Lloyd Ranch. In 1964 Homer became a Realtor and moved the family back to Craig where he became an agent for United Farm Agency, later he went on to open his own real estate company, Western United Reality, where he and his brother Jim sold several ranches. Homer had three Western United Offices and after a successful career decided to sell the business in the early 1980s. Homer continued to hold a real estate license well into his 70s and partnered in many commercial and residential transactions.
After the sale of Western United Homer and his son leased several ranches in Moffat County and summered grass cattle for various customers from California and Colorado. Homer was back to being a full time cowboy and enjoyed the time horseback. In the mid-90s he moved to Fruita, Colo., and continued to stay involved in roping and tying his famous rope horse halters which he loved to share with people.
He enjoyed people and a good laugh. He loved to be a cowboy and found a great deal of pride in that way of life. He spent many winters in Arizona roping and visiting with friends, and he was active in the 4-H foundation for 20 years. He was the Ride and Tie Marshal and was a part of the development of the indoor arena at the Craig Fairgrounds. Homer was an auctioneer and enjoyed using that talent to help the community by selling the Moffat County Junior Livestock Sale. Homer also performed a wedding ceremony for a family friend. He loved a good horse and enjoyed roping and rodeo. He was a good father and friend and his humor and laugh will be missed and remembered lovingly.
A celebration of life will be held at 10 a.m. on Saturday, Aug. 18, 2012, at the Moffat County Fairgrounds Pavilion Building in Craig, Colo.

Listen to this post On Thursday, Jan. 7, 2016, Jimmy Joseph Bruce of Meeker, Colo., went home to be with his Savior, Jesus Christ. He passed away from brain cancer at the Hospice Care Center […]

Listen to this post Joyce Rawlinson, Strawberry Creek rancher, passed away at Pioneers Hospital on Nov. 15, 2011.