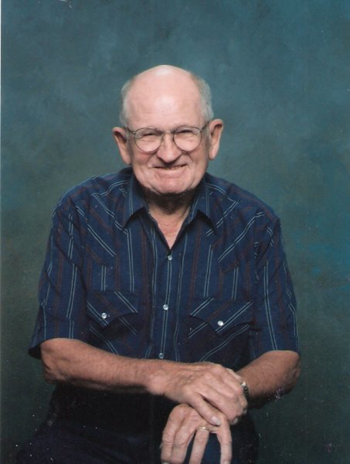 On the mild day of Nov. 19, 1916, Henry and Ruby Tynes celebrated the birth of their firstborn child, John Vigil, who immediately became known as J.V.
J.V. and his siblings, Troy, Kawana (Sis), L.D.(Windy), Billie and Betty Ruth all grew up working on the family farm in Orr, Okla., where shoes were only necessary for working and church. They worked hard on the farm but always enjoyed listening to Henry play the fiddle and singing along in the evenings.
After he jokingly proclaimed that he had taken nearly every course twice and that there was nothing more to learn, he was graduated from Orr High School. During his high school years, he enjoyed playing baseball and basketball, where he was actually one of the taller members of the team, and unintentional skinny dipping in the farm tank.
After high school he set off to Texas to find work. He landed one of his first jobs away from home when he applied for a job at a granary, which also happened to have a farm league baseball team. Since he had always enjoyed playing baseball, he tried out and made the team, which was required in order to get the job. Soon after, the owner’s wife had asked him to help bring down items that were in her attic. Having never lived in a house that had rafters, let alone an attic, he was unfamiliar with attic flooring. As he eagerly moved to retrieve the items, he proceeded to fall through the ceiling right into the living room, where his boss’s wife was having a tea party. Needless to say, he found it necessary to seek employment elsewhere.
He returned home to work on the farm. On Christmas Day, 1938, he put on his best clothes and went to the house next door to claim his bride, Donita Gothard. They were married that day and enjoyed nearly 59 years of marriage.
During the early years of their marriage, they decided to load up their car and move to west Texas where jobs in the oilfield were plentiful. It was during their time in Littlefield, Texas, that their daughter Gwendolyn June (Junie) was born. In 1945, the California Oil Company offered them a transfer to the place that they have called home since then, Rangely. Their family was made complete when their son John Jr. was born here.
The one accomplishment that he was always proud of was moving to Rangely and helping to build the First Baptist Church. He was the last surviving charter member.
He continued to work in the refinery until the early ‘70s when he and Donita purchased the Rangely Standard Station. They retired in 1982 but their retirement lasted only a couple of weeks. They were offered the position of managers for the Sagewood Apartment Complex. Of all the jobs they held, they considered these last two to be the most rewarding. It was through these times that they were able to welcome many, many newcomers to Rangely. Oftentimes over the years people have said that they were the first people they met when they moved to town and because of their generosity, they helped to make them feel at home in their new surroundings.
Life was always and adventure for them. They enjoyed their annual trips to Oklahoma in their motor home. There was always a story to tell about their last trip which may have included asking for help from a shady looking stranger while Donita held a hammer behind her back or to trying to call someone on the CB radio. He had such a wide variety of interests that ranged from stained glass to golf (until he dumped Donita from the golf cart) to watching professional wrestling on TV. He loved learning new things and tinkering with old things.
After Donita passed away, he returned to Oklahoma where he enjoyed spending time with his brothers and sisters and dancing most nights of the week. Dancing became his favorite pastime and kept him in shape. Health reasons forced him to return to Rangely.
On the evening of July 18, 2010, the Lord quietly called him home.
He is survived by his children Junie (Larry) Rangely, John of Grand Junction, six grandchildren, five great-grandchildren and one great-great grandchild, sisters Billie and Betty Ruth, and many nieces and nephews. He is preceded in death by his wife Donita, parents, brothers Troy and L.D, sister Kawana and daughter-in-law Candy.
He leaves these last words … “Somewhere in the west we’ll build a little nest.”

In response to the letter printed on April 8 regarding the four-day school week, I would remind the readers that it is the job of the schools to educate, not to provide daycare, parenting services […]