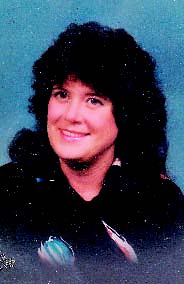 Jennie Lee (Clapper) Mullally was born to Irvin “Spec” Clapper and Josephine “Josie” (Davis) Clapper at Pioneers Hospital on June 2, 1953. Following a 17-year battle with cancer, she left her earthly home from the same hospital on July 3, 2012, at age 59.
Jennie was raised on the family ranch on the Mesa south of Meeker and received her education in the Meeker schools. She was a talented musician, playing the French horn in the junior high and high school bands. Applying her natural gift for playing by ear, she frequently entertained family and friends playing the piano and accordion.
From the time she was a small child, her daddy woke her every morning with a “Hey, Smiley,” and she never failed to raise her sleepy little head wearing a smile full of sunshine. Throughout her life, that smile and her big brown eyes were her “trademark.”
Jennie’s ambition and work ethic were admirable. For much of her adult life she held two jobs to provide for herself and her children. Her last job was with Albertson’s Grocery Store in Grand Junction. She had advanced to a managerial position, and when her illness began to affect her performance, her employers held her job for months, hoping she would again become able to return to the staff. A special benefit Jennie enjoyed was seeing people from Meeker who chose to shop at Albertson’s when they were in Grand Junction.
During her life, Jennie lived and worked in Steamboat Springs, Colo., Reno, Nev., Los Angeles, Calif., Wilmington, Del., Key West and Lakeland, Fla., and Grand Junction, Colo.
Jennie was a mother, a grandmother, a sister, a daughter, an aunt, a teacher and a friend to so many. There was not a heart she didn’t bless. She is survived by her children, Vincent Mullally and Josephine Mullally, daughter-in-law, Rita Mullally, and grandchildren, Kiera and Ashlyn Mullally; sisters Vera (Earl) Lyons, Vina Klahn, and Kathy (Darin) Floyd, sister-in-law, Sharon Clapper, and brother-in-law Jim Riegel, as well as her beloved nieces and nephews, and many, many friends. Jennie was preceded in death by her parents, Spec and Josie Clapper, sister Debbie Riegel and brothers, Gene and Bruce Clapper.
Services for Jennie will be held on August 16, 2012, at 10 a.m. by Pastor Johnny Arrington at the Meeker Methodist Church, on the corner of 8th and Park streets in Meeker.
Donations can be made to Grant Mortuary and Crematory located at 621 Yampa Avenue in Craig, Colo.

Rangely resident Eva June Dotson passed away on Tuesday, June 30, 2015, at Delta County Memorial Hospital in Delta, Colo. She was 80 years of age.

Barbara Wade left this world on Saturday, April 11, 2015, the same way she lived in it: surrounded by family in the place she called home.

Kathie Lynn Fenstemaker passed away at the age of 59 at her home surrounded by family in Rangely, Colo., on Aug. 24, 2013.