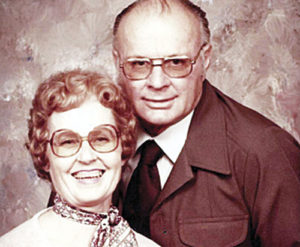 Joseph Brown (Joe) Spence was born July 4, 1925, in Meeker, Colo., to Joseph Wert Spence and Jennie Mary Brown Spence. Joe spent his childhood in Meeker on the family ranch. His father was a rancher and an entrepreneur and his mother was a school teacher.
Leila May (Pinkie) Spence was born May 13, 1924, in Siebert, Colo., to Odry C. Martin and Viola May Harrison Martin. Her father was a farmer and her mother was a homemaker.
Joe and Pinkie met in high school in Meeker, Colo. Joe was a senior in high school when World War II broke out. He enlisted in the U.S. Navy in 1943. On Feb. 12, 1944, Joe and Pinkie were married while Joe was on leave. They spent a short time together in Astoria, Ore., until Joe shipped out to the South Pacific where he was a gunner on a naval mine destroyer. Joe was honorably discharged in 1945. The couple reunited in Meeker, Colo., and made their home on the family ranch where they lived for many years and reared their family.
Joe — To his family and close friends he was JoePa, and JoePa was a giant. He was not a giant because of his physical stature, although he was a tall, agile man and as strong as they come. Rather, it was his big heart and tremendous spirit that made him a giant. It was his genuine love for his family. He was a refreshingly positive person. He lived with a profound benevolence, strong work ethic, integrity and sense of humor. He was down-to-earth, intelligent and practical, with a keen understanding of both the natural and mechanical worlds. He understood how to get things done and took great pride in his work. He was also a great storyteller and had lots of great stories. They were true stories, too. His life was so rich and colorful and filled with good characters that he didn’t have to make anything up. The magic was in the way he told them and his smile. He revered life. He had a big family and each member was loved and treated fairly by JoePa. Regarding one of his grandchildren he once said, “That is one of my finest creations.” The way that he said such things came across as a compliment to his grandchildren and not himself.
Pinkie — Mom was a beautiful, gentle spirit who wished the best not only for her family but everyone she knew. The only time she was fierce was when she felt the need to protect one of her children or “right” a “wrong.” She grew up in hard times and endured hardships, but more importantly she managed these difficult times with dignity and grace. When she made personal sacrifices, she would never mention them to anyone. She was a genuinely positive person and always believed everything would turn out “right” and so it did. She was a famous family cook and baker. She cooked for 50 people as easily as she did for seven and she often cooked for 50 or more. Many a time on the ranch, a neighbor would show up to talk to Joe about something. We wondered why it was always at breakfast or dinner time. Could have been the pinch of sugar that she was generous with in most meals. She took care of her family and looked after her neighbors. She is one of the last of an innocent generation. She trusted a person for their word and lived by hers. She felt at home at children’s school events, church and on the ranch. She felt at peace in rural areas with all the quietness of nature. She was a very friendly person with a quiet, powerful strength that comes to one who is truly happy with their life.
Joe and Pinkie were a loving and devoted couple for 68 years. Their union was beautiful from beginning to end and it exemplified the sanctity of marriage and becoming one. They shared the power to stay positive and maintained their keen senses of humor regardless. They had a happy life together. They will be greatly missed by their family and friends and anyone who has ever enjoyed spending time with them in their positive light. Their enduring gift is the way they lived their lives and taught their family, and continue to teach us, how to be better human beings.
Survived by their five children: Vickie (Jim) Kirkpatrick, Lakewood, Colo.; Joseph M. (Clarice) Spence, Winston-Salem, N.C.; Billie (Bob) Witham, Grand Junction, Colo.; Shelley (Keith) Pankey, Craig, Colo.; Gaye Ann (Terry) Crabtree, Hanson, Ken.; 11 grandchildren and 16 great-grandchildren, four nephews, two nieces and numerous great-nephews, nieces and friends.
A celebration of life for Joe and Pinkie will be held in Meeker, Colo., in June 2012.

Kleo Kay Goforth, aged 75, died peacefully on the morning of Aug. 4, 2015, at her home in Mesquite, Nev. after a long battle with cancer. Facebook Notice for EU! You need to login to […]

Patricia Helen Thompson, 61, wife of Buddy Thompson, passed away at her home in Meeker Oct. 25, 2011. Facebook Notice for EU! You need to login to view and post FB Comments!

Wayne Erekson (Cooper), 43, of Las Vegas, Nev., passed away at his home. Facebook Notice for EU! You need to login to view and post FB Comments!