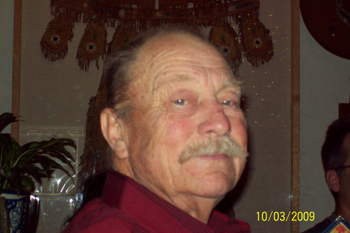 John Edward Orris, Sr., 72, died Saturday, Oct. 3, 2009, in Durango.
A Mass of Christian Burial was celebrated at 10 a.m. Wednesday, Oct. 7, 2009, at St. Columba Catholic Church, with Father James Koenigsfeld officiating. Burial will follow at Greenmount Cemetery.
John was born Sept. 2, 1937, in East Millsboro, Pa., the son of Joseph C. Orris and Anna Christina Lilley. After graduation from Brownsville High School, John served four years in the U.S. Air Force. On Oct. 3, 1959, John and Carmen Guevin were married at St. Anthony’s Church in Manchester, N.H. John was employed by New England Telephone and Telegraph Co. until 1973, when the family moved to Meeker. He transferred to Mountain Bell and worked until 1985 after which he did private contracting for various telephone companies.
John and Carmen moved to Durango in 2005 to be close to their children and grandkids. John enjoyed traveling and spending time with his family and was a member of St. Columba Catholic Church.
John is survived by his wife Carmen Orris of Durango; son John Orris, Jr., of Durango; son Joseph and wife Sandy Orris of Cortez; daughter Amy Orris of Durango; sister Pauline Izett of Brownsville, Pa.; sister Ann Meikle of Monongahela, Pa.; grandsons Michael J. Orris, Wyatt and Wade Deaderick of Durango; granddaughters Nicole and Brandy Orris and grandson Jacob Ryan Orris of Cortez; and great-granddaughter Karly Orris of Meeker; and many nephews and nieces.
He was preceded in death by five brothers and his parents.
In lieu of flowers, please make donations in memory of John E. Orris to the Four Corners Heart Clinic, 1 Mercado St., Suite 130, Durango, CO 81301.

The Meeker Herald — 100 years ago • A new schedule went into effect yesterday on the Rifle-Meeker mail route that affects incoming and outgoing stages. Instead of leaving Rifle at 7 in the morning, […]

One could say that living in the White River Valley requires that one dress for success. This is not the kind of success for which city dwellers strive. It is the ability to outfit oneself […]