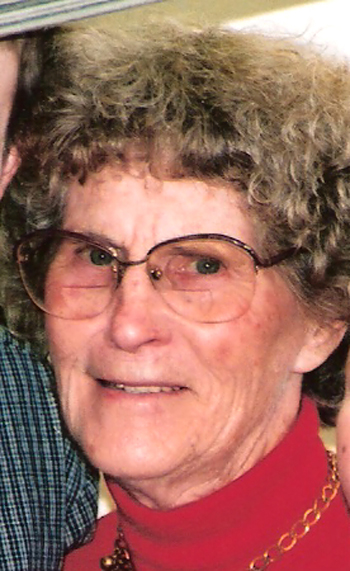 Josephine (Josie) Katherine Davis was born Feb. 10, 1922, to Gene and Helen Davis in Meeker. She left us on Nov. 5, 2010.
Josie attended elementary school at the old Rock School on Strawberry Creek and high school in Meeker. She married Spec Clapper in 1938. Spec and Josie were the parents of seven children.
The early years of their marriage found Spec and Josie employed on several ranches in the Strawberry Creek and lower White River areas. In 1944, they purchased a ranch on the Mesa southeast of Meeker, where they made their home until they sold the major part of the acreage in 1977.
Josie was renowned for her skills in the kitchen. In their first years of marriage she cooked for Spec’s fellow ranch and farm hands. Later, she was master chef for Clapper Custom Haying crews, for clients of the Clapper guide and outfitting business, and quite naturally for countless family gatherings. It would be hard to estimate how many pairs of feet were happily planted under her table over the half-century she plied her culinary crafts.
Josie was the quintessential stay-at-home mom, but she carried her share of the financial load. An accomplished seamstress, she created countless “made from scratch” and “made over” garments for her family; she bought 100 baby chicks every spring for years, saving the pullets for layers and butchering the fryers; along with Spec, she helped butcher, cut, and package pork, beef, and venison for the freezer; she raised huge gardens; she canned thousands of quarts of fruits, vegetables, meats, jams and jellies; she churned butter and baked all the bread; she mended socks and patched britches; she refinished and reupholstered furniture; she entered food exhibits in the Rio Blanco County Fair, with an eye on the money awards and the jars of honey provided by Holzeberllien Honey Company; she was a recycler long before anyone thought of going green. She was the family barber and stylist — economical, but not always producing results that pleased her children. She was, indeed, the epitome of thriftiness.
She loved to dance and was known, on occasion, to do a mean Charleston in the kitchen.
Over the years, Josie was a member of the Mesa and Harmony Extension clubs, the United Methodist women and Josephine Rebekah Lodge.
The brightest star in Josie’s crown was her devoted mothering and grandmothering. This quality of her spirit survived long after her illness stole her memory.
Josie was preceded in death by Spec, her husband of 62 years, daughter Debbie Riegel, sons Gene and Bruce Clapper, her parents, sisters Ann Pierce and Mary Gustafson, and brothers Bud, Vern, and Homer Davis.
She is survived by daughters Vera (Earl) Lyons of Ogden, lowa; Vina Klahn of Battlement Mesa; Jennie Mullally of Palisade; Kathy (Darin) Floyd of Craig; daughter-in-law Sharon Clapper of Meeker: son-in-law Jim Riegel of Meeker; sister Nora Carberry of Santa Rosa, Calif.; 13 grandchildren; 17 great-grandchildren; numerous nieces and nephew; and a host of friends.

Listen to this post Ruthell Lamoreaux Haycock, 76, passed away Jan. 9, 2012, in Albany, Ore., from secondary effects related to Alzheimer’s.

Listen to this post Six men arrested last week as part of a coordinated drug bust made their first appearance in district court Friday.

No snow this time for MHS tracksters

Listen to this post MEEKER I This past weekend, the Meeker High School Track and Field team traveled to Grand Junction for their second meet of the season, hosted by Palisade High School. This time, […]