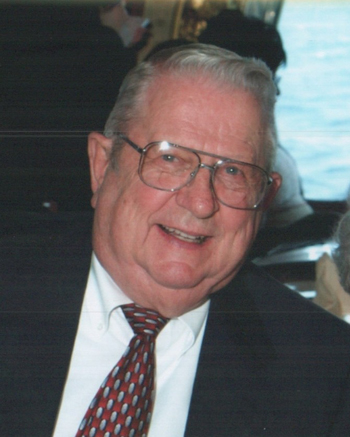 Loial Blain Haas, “Kemper,” 78, passed peacefully in his sleep at his home in Redmond, Wash., on Tuesday, Nov. 16, 2010, of natural causes. He was born on Nov. 18, 1931, at the Eben Ezer Hospital in Brush, Colo., to Henry D. Haas and Gloria I. Nichols. Loial was raised in Fort Morgan, with his younger siblings Jean G. Porter and H. Charles Haas. He and his buddies were called “The Thugs” in high school and he loved to ride his motorcycle, dragging his heels to make the sparks fly.
Loial married Wanda A. Howell in February 1953. She preceded him in death in 2006. He remarried in January 2009 and is survived by his second wife Patricia Mann-Getz and his three daughters K. Kimber Prince (Stephen), Tracy E. Lewis (Robert), and Robin Root James (Larry); grandchildren Courtney M. Lewis, Alexsa K. Prince, Trevor W. Lewis and step-grandchildren Adam C. Prince and Whitney James.
Loial attended Kemper Military School in Booneville. He volunteered with the ROTC, and after declining a commission as 2nd Lt. in the U.S. Army was commissioned in the Army Reserve, military occupancy specialty, as a fixed and rotary wing pilot serving with the 30th Engineer Group (Topo Avn) in Alaska. He loved flying in Alaska.
Loial was honorably discharged from active duty 1957, served in the Reserve 498th Engineer Group until he was honorably discharged. Flying and motorcycles remained an interest of his throughout his life time.
Following his military career Loial pursued his education at the University of Colorado in Boulder. He earned an AS in engineering, KMS 1951, BS in architectural engineering, CU 1953 and BS in civil engineering, CU 1958.
Loial and Wanda moved to Bellevue, Wash., in June 1958, when Loial went to work for the Boeing Company. Loial left Boeing in April 1972 to work for the Seattle Housing Authority until he and Wanda stared their own business Kemper Consulting Service (KCS) in October 1982. They moved to Marysville Wash., in 1998 and continued working as KCS until they retired in May 1999. Loial’s occupation was always civil engineer and he was one to “Solve the Problem.” He especially enjoyed working for and with Bob Hurst, Jim House, Jim Kendall, Carl Vigna, Glen Anderson, Bob Brady, Ralph Hearn and Bill Nishimura.
Loial was active in the community as the chairman of the Bellevue School District Facilities Committee Development in the 1970s. He was also an active member in the Episcopal church, serving as the junior and senior warden at the Resurrection Episcopal Church, Bellevue, Wash., and then as a member of Bishop’s Committee, at Saint Philip’s Episcopal, in Marysville, and as a member of the Vestry for Trinity Episcopal Church, Everett, Wash. He found time to serve as a patrolman in the Marysville Seniors Against Crime.
Following retirement in 1999 Loial and Wanda built a new home and moved to Trilogy on Redmond Ridge in Redmond in 2003. About two very lonely years after Wanda passed in 2006, Loial became reacquainted with his childhood sweetie, Patricia. It was a whirlwind romance and they were married in January 2009. Patricia and Loial traveled extensively and visited their children in Colorado, Montana and Washington
Loial identified his special accomplishments as: Never jailed or arrested, was civil enough for my wife to put up with me, and was a part of raising three darling daughters.
He will be dearly missed.
Services were held at the Trinity Episcopal Church in Everett, Wash., on Nov. 21, 2010. Please send any memorials to the Trinity Episcopal Church, or the Ronald McDonald Charity House.

Listen to this post Looking for a way to help the victims of Hurricane Harvey? Meeker Fire and Rescue is coordinating a relief drive.

Listen to this post The local Rocky Mountain Elk Foundation banquet and auction will be April 2 in Meeker.