Marie Baughman, 90, passed away May 8, 2009, at the Colorado State Veterans Nursing Home in Rifle. Marie was born Feb. 11, 1919, in East Grand Rapids, Mich., to Gillis and Jennie (DeMan) Vandenberg. Her father was an immigrant from the Netherlands and entered the United States through Ellis Island. 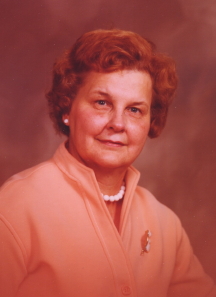 Marie was graduated from Central High School in Grand Rapids, Mich., in 1936. Following high school she attended business school, then decided to pursue a career in nursing. She received her nursing degree in 1940 from Butterworth Hospital in Grand Rapids, Mich.
Marie was a lieutenant in the U.S. Army Nursing Corps stationed at Fort Custer, Mich., where she met her true love, Lt. Dale W. Baughman. They were married Aug. 23, 1941, at Fort Custer, Mich.
During their 60-year marriage, they lived in Michigan, Texas, West Virginia, Pennsylvania, Montana and Colorado. Canon City, Colo., was their home for 30 years.
Marie worked as a registered nurse and later became a licensed nursing home administer. She was the first female nursing home administrator of a Colorado State Veterans Nursing Home. She opened the Florence facility in 1976.
She was a loving wife and devoted mother, grandmother and great-grandmother. She loved to cook and sew; was active in the Presbyterian Church and loved to read and travel with her husband.
Marie is survived by three children: John (Demity) Baughman of Cody, Wyo.; Deborah (Linn) Pettijohn of Meeker; and Jennifer (Patrick) Key of Flagstaff, Ariz.; daughter-in-law Deborah Cardenas of San Francisco; sister Phyllis (William) Koning of Modesto, Calif., and brother-in-law John R. Baughman of Englewood, Fla.; nine grandchildren, 13 great-grandchildren, one niece and three nephews.
She was preceded in death by her parents, husband Dale, son Bruce Baughman, brother Edward Vandenberg, nephew Paul Koning and sisters-in-law Laura Baughman and Mary Boothe Vandenberg Healy.
A memorial service will be held this summer in Canon City, Colo. In lieu of flowers, donations may be made to the scholarship fund at the United Presbyterian Church, PO Box 856, Canon City, CO 81215.

Austin James Stoner left us suddenly and unexpectedly on April 19, 2009, in Rangely, Colo. He was 18.