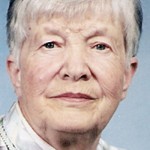 Ruth was born March 29, 1925, in Meeker, Colo. She was the fifth child of Howard McClellan Wright and Hildur Louise Johnson Wright. The story goes that her mother was having trouble carrying this baby to full term. The mama and the unborn baby went to Meeker to stay for a month or so before the due date. They stayed with a lady on Water Street in her home and there the baby was born. When Ruth was 10 days old her father came for her and the mama with a team and sled and the long ride back to Morapos Creek where they homesteaded.
Ruth passed away on Jan. 20, 2011, at Pioneers Medical Center in Meeker, Colo. Her daughter and her son were at her side.
She grew up on the original Wright homestead and attended school at the one-room schoolhouse on Morapos until she was 7 years old. Yes, she did ride a horse two miles to school every day with her brother and sisters. Her family then moved to Craig where she completed her schooling. She was graduated from Craig High School with the class of 1944.
Ruth attended and was graduated from cosmetology school in Ogden, Utah in 1945. After she graduated she received a phone call from a guy in Craig, Colo. His name was Don Seick and he asked her to come back to Craig. The rest is history. They were married July 15, 1945, in Craig. They celebrated their 65th wedding anniversary in 2010. To this union two children were born, LaDawn Lea and Michael Edward.
She walked hand in hand with her husband through his trucking, farming and other ventures. She truly was a farmer’s wife and she knew the seasons. Yes, even the seasons of life. She retired from Mountain States Telephone Company after 17 years of service as an operator and she and Don went back to farming on the Jack Rabbit ranch.
Ruth was a quiet and compassionate woman and was the matriarch of her family. She was all about family and Jesus. She had the faith and was a giant of a little woman. Her family loved, respected and trusted her.
She was a member of the First Christian Church since 1946 and a member of Alanon for 52 years. She knew where help came from. And she valued her friends.
She was preceded in death by her husband, Don, who passed away Nov. 20, 2010; her parents, Howard and Louise; brothers Sonny, Dick and Bob Wright; sisters Dorothy Newsom, Grace Lemmon and Betty More; brothers-in-law Edward, John and Milt Seick, Frost Newsom, Al Lemmon and Buster More; Sister-in-law Alvina Seick.
She is survived by her daughter LaDawn (Glenn) Sexton and son Michael (Denise) Seick, all of Craig. Her brother-in-law Wayne Seick, Mesquite,Nev.; sisters-in-law Hazed Seick, Scotts Valley, Calif.; Maudeen Wright, Grand Junction, Colo.; and Louise Wright, Walla Walla, Wash.; grandchildren Jim Gumber, Craig, Colo.; Tobi (Frank) Chacon, Craig, Colo.; Christopher (Lindsay) Seick, Midvale, Utah; Aaric Seick, Meeker, Colo.; and Brandon Seick, Craig, Colo.; great-grandchildren Javen, Reilley, Brooke, Joshua Gumber, Marlee, Issac and Jerod Chacon and Andrew Sexton all of Craig; and numerous nieces and nephews.
Private services were held for both Ruth on Jan. 30, 2011, at the Craig Fairview Cemetery. LaDawn Sexton gave her mother’s eulogy and memories were given by her loving family. At this time interment of the cremated remains of both Don and Ruth were laid to rest side by side.
Honorary pallbearers were her grandsons: Jim Gumber, Aaric Seick, Javen Gumber, Frank Chacon, Brandon Seick, Jerod Chacon, Christopher Seick, Isaac Chacon and Joshua Gumber.
A luncheon and sharing time followed at her daughter’s home.
She was a loved daughter, sister, wife, mother, grandmother and aunt. She will be greatly missed by all. We loved her deeply.

Born to Edgar and Louise Reed in Cortez, Colo., on March 1, 1925, she was the youngest of five children. Crissie was very proud of being a descendant of the early settlers of Colorado.

MEEKER | The public hearing regarding moving the historic Methodist church building to Ute Park, which requires a revision of the Ute Park master plan by ordinance, was moved to Thursday, May 26 at 7 […]