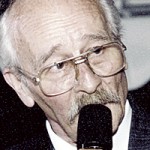 Tony Valentine, born in Chicago on Jan. 24, 1935, passed away in Sun City, Ariz., June 9, 2011. His parents, Clara and Howard Magid, predeceased him. Tony and his wife of 39 years, Mary Ann Valentine, resided in Meeker for about a decade before moving away in 2009.
He served in the U.S. Air Force before attending the Jewish Theological Seminary Cantorial School and Julliard School of Music in New York City. He changed his name from David Magid when he became a cabaret singer, performing in Chicago, Los Angeles, Las Vegas and Palm Springs. He came out of retirement to sing at weddings in New York City as recently as 2007. He ghostwrote the music and lyrics for the popular song “Earth Angel,” which became a classic.
He is survived by his wife Mary Ann, children Ari and Marty Orenstein, Gina and Anthony Valentine, and Pete and Mike Simonelli, 10 grandchildren, one great-grandson, sister Ruth Golb and cousin Jim Magid of New York and Meeker.