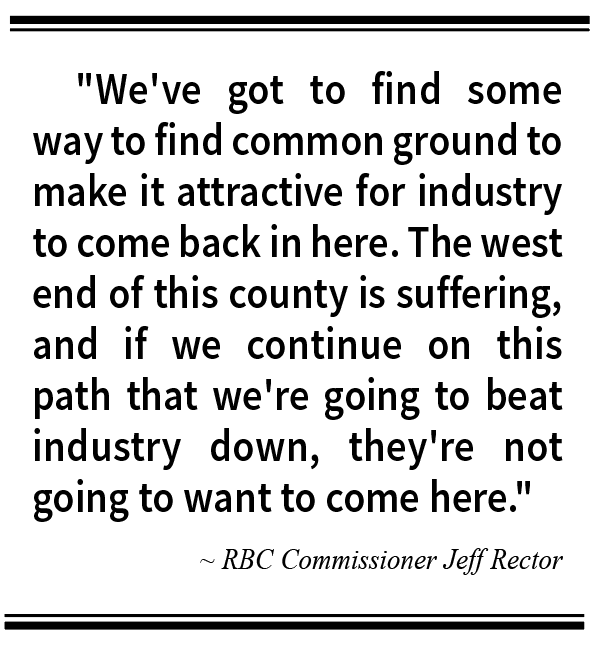 RANGELY I Seeking additional public input from the west end of the county regarding the county’s building codes and building inspection process, the Rio Blanco County Commissioners held a meeting in Rangely last Tuesday, following a similar meeting Monday in Meeker.

The commissioners heard from local contractors, firefighters, residents and more. Overall, public comments were largely in favor of keeping the county’s building codes, and in support of county building inspector Jeff Kummer.

Commissioner Jeff Rector said the board intends to adopt the 2018 codes, and then amend them to “fit” the county, not get rid of the codes altogether. Even the counties that don’t have a building department or a building inspector are still building according to codes, he explained.

“These counties that aren’t using building codes, they’re hiring private inspectors. Everything is still built to code. They don’t throw the code out the window. What they’re doing is they’re getting rid of their building department,” Rector said.

While there was some discussion—mostly from the commissioners—about government overreach and excessive regulation, the majority of the commenters expressed concerns about risks to public health and safety without a consistent method for code enforcement and building inspections.

“If it’s a free-for-all how a building was put up, that’s a concern for the fire department,” stated Rangely Mayor and Fire Chief Andy Shaffer.

Privatized inspectors are not professionally licensed in the state of Colorado, meaning anyone can claim to be an inspector with or without experience, which is a point of concern for builders and residents.

“In this case we need someone who is paid by the public for the public good. Just like our fire and police are public servants, paid to protect us, I believe that is the role the building code concerns,” said property owner Deirdre Macnab.

Questions about who would determine if a structure was built according to code and suitable for habitation without a building department were asked. The commissioners said they don’t have answers to all of those questions yet, and are simply seeking public input to know what the residents of Rio Blanco County want from county government as it pertains to building codes.

“There’s been a lot of dissension with our building department and the county, especially with industry, and we all know we rely on industry to support our county. That’s what’s driving this more than anything, it’s not residential, it’s commercial,” Rector said. “We’ve got to find some way to find common ground to make it attractive for industry to come back in here. The west end of this county is suffering, and if we continue on this path that we’re going to beat industry down, they’re not going to want to come here. We need to make it as attractive as possible for industry to bring their people here.”

“These topics were always really hot. I think it’s a good idea to update your code and go through there and pick out the parts we want for our county. It’s health and safety we’re looking at here. I think back to times when we didn’t have a good quality building inspector in this county and there was some real shoddy work that got done. I know that the county has paid to take care of certain customers that have been affected by having bad inspections that happened many years ago before Jeff [Kummer] came on to the county,” said former RBC commissioner Ken Parsons, who added that in his memory, the big industrial construction in the county was mostly dependent on state inspectors.

Local electrician Alan Ducey said, “I think the county has got to be inspected and have the building code. Having a county inspector is a must for the whole county. It needs to be the same on both ends. I really think you’ve got to have an inspector, somebody needs to watch over everybody.”

Rector said moving forward the board hopes to put together an advisory board to come up with a “common sense” approach that will better fit the needs of the county.

Listen to this post RBC | Commissioners appointed Terry Drake to the Rangely Lodging Tax Board at their regular meeting Monday, June 12. Drake is the general manager of Moosehead Lodge. Commissioners approved a memorandum […]

Listen to this post RBC I A number of rumors, concerns and fears were put to rest Monday afternoon as the Rio Blanco County commissioners postponed a public hearing regarding a new service plan proposed […]