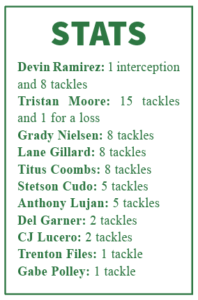 RANGELY | The Panthers hosted the 2-0 Vail Christian Saints last Friday. Off to a hard-nosed start, the Saints received the ball and took up the whole first quarter. They finished at the opening of the second quarter with a 2-yard run and two point conversion to jump out on top of the Panthers 8-0. The Panthers answered quickly with a seven play drive capped off 2-yard run by Devin Ramirez and Ramirez also added the two point conversion. The rest of the first half was tied up again by a grind from the saints scoring to close out the half and leading the Panthers 14-8.

Rangely started the second half with the ball, scoring on the first play from scrimmage on a 65-yard strike from Drew Brannan to Ramirez again. The two point conversion was good on a pass from Brannan to Files. Vail Christian answered again with another long grinder of a drive scoring on an 8-yard run and completing the conversion on a pass sending the score to 22-16 Vail Christian.

The Panthers have a bye this week and then host No. 2 West Grand for homecoming on Sept. 28 at 7 p.m., which should be a great game. Come out and support the Panthers.