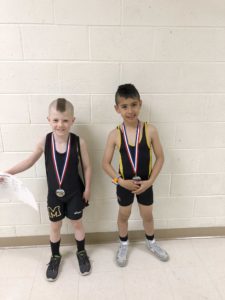 Another weekend for peewee wrestling and the Cowboys were on the road to Rifle. “The kids wrestled well,” said head coach Carl Padilla. “Forty-one of 48 wrestlers placed in the top four.”

This coming weekend is the last tournament of the year, and the team is headed to Grand Valley on Saturday. Meeker was unable to host the annual Casey Turner Memorial tournament this year due to school renovations.