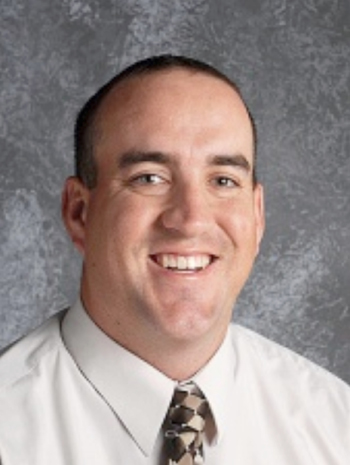 RANGELY I Tim Hayden, a 1998 Rangely High School graduate, was selected as the 2010-2011 Kansas Middle School Principal of the Year.
Hayden is principal at the Valley Center Middle School in Valley Center, Kan., just north of Wichita.
Operating under the core belief that students don’t care how much you know until they know how much you care, Valley Center Middle School has built its recent success on creating positive relationships with all students and providing learning opportunities relevant to today’s learner.
After earning his bachelor of arts in elementary and special education from McPherson College in 2002, Hayden began his teaching career as a second-grade teacher in Andover, Kan.
Following his second year of teaching, Hayden looped to third grade, where he continued teaching for three years. During his five years in Andover, Hayden served as basketball coach at Andover Central Middle School and was recognized as a Kansas Horizon Award Winner in the spring of 2003. He earned his master’s degree in educational leadership from Wichita State University in 2007 and accepted his first leadership role as the assistant principal at Valley Center Middle School in the fall of 2007. After serving one year as assistant principal, he was named principal of VCMS in 2008.
Hayden’s mission since 2007 has been to focus the culture at VCMS on positive reinforcement for students and staff.
Part of that has been a reward system for good behavior.
“Celebrating and recognizing kids for all the cool things they do has kind of changed the culture of the building,” Hayden said. “Our staff is all about energy and building relationships. It’s good for kids.”
Hayden said it’s more difficult as a principal to find time to spend with students during the school day. He tries to make it to the cafeteria during lunch and go to games in the evenings. “My core belief is you have to build relationships and you have to have energy,” Hayden said. “You can learn the rest. I want the kids to know that I care.”
Hayden, 30, said he’s fortunate to be surrounded by teachers and administrators who care about students, and any accolades he receives should be spread among them.
“I’m a very lucky guy,” Hayden said. ‘My dad always told me the harder you work, the luckier you are. So, I’ve been trying to work really hard every day.”

Listen to this post RANGELY | Don’t miss the annual Seaplane Splash-in at Kenney Reservoir this Saturday. After missing 2020, the seaplanes are returning in 2021. Organizer Ray Hawkins said he expects two or three […]

Listen to this post RANGELY | J.P. Harrington, a graduating senior at Phillips Academy Andover, has been named one of more than 3,000 candidates in the 2010 Presidential Scholars Program. The candidates were selected from […]

Listen to this post How many parents have heard their kids say, “There’s nothing to do here.” Growing up in Meeker, I admit those words came out of my mouth but not very often. It’s […]