RANGELY | The Rangely High School team took on a new course this year as they headed to the Ramble at the Reservoir at the Ridgeway State park hosted by Ouray. The runners knew the course was going to be challenging and knew it had switchbacks but they didn’t know how challenging until they got there.

The girls were the first ones on the line this weekend, missing senior leader Raelynn Norman due to illness. Mary Scoggins took off fast, hoping to get in with the first pack of girls as the trail narrowed pretty quick. As she headed up the mountain she was in the top 25 and was able to pass several along the way to be in the 15th position at the top. As the race continued she found herself with two other girls from Basalt and at the end and was able to pass them on the home stretch of the race to finish in 10th place with a time of 25:45. Chloe Filfred and Aliyah Jackson were given the challenge to run together so that they could encourage and work off of each other like they do in practice. They accepted the challenge and were able to complete it. Jackson finished in 22nd place with a time of 28:45 while Filfred was right behind her with a time of 28:56 in 23rd place. Brook Filfred ran a strong race on the hills and had a great finish. The girls took fourth place overall as a team. 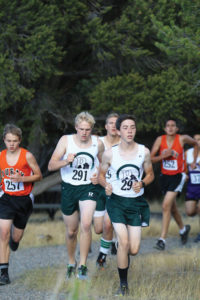 The boys welcomed senior Marshall Weber onto the team for the challenging race. Weber decided to give cross country a try now that his golf season is over. He knows how to work hard and will make a nice addition to the team. Weber took off with Colton Noel but used his powerful legs to pass Noel as they descended the mountain taking 31st place with a time of 24:47. Noel who was only a couple places behind finished with a time of 25:44 and Timothy Scoggins ran at 28:10.

The Panthers will have a busy week this week with homecoming and a meet on Tuesday in Soroco then on Saturday in Craig.

The Rangely Middle School cross country also traveled to Ridgeway State Park for the Ramble at the Reservoir raced hosted by Ouray. The race was a 3K or 1.85 mile race with the start heading straight up a mountain and through pinyon trees. The race was divided into two sections of girls and two sections of boys to help divide the over 240 runners for the middle school race.

After an hour wait the Rangely boys were up to run the “A” race. Andrew Dorris took off fast with his brother Anthony not far behind him and Fisher Winder right behind him. Justin Allred went out a little slower but had a great finish. Andrew Dorris took 12th with a time of 15:44, while Anthony took 22nd with a time 16:59. Fisher had a great finish while passing a runner at the finish line and placed 28th with a time 17:38. Allred ran a 19:31. The boys took fourth place as a team.

The middle school runners will be running in Soroco on Tuesday, then will find themselves in Craig on Saturday.