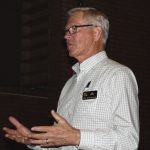 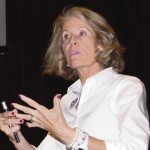 Fifteen people gathered in the Meeker High School auditorium Tuesday for presentations from House District 57 State Representative Bob Rankin (R-Carbondale), and his wife Joyce Rankin, our Congressional District 3 member of the State Board of Education (SBE). Most attending the meeting were Meeker School District employees or Board of Education (BOE) members. The Rankins emphasized the advantages of being able to work together on issues facing HD 27 / CD 3 citizens. Both Rankins will be on the November ballot. Rep. Rankin is running unopposed for what will be his third term in the Colorado House. Joyce Rankin is running for election to the last four years of Marcia Neal’s six-year SBE term. Largely for health reasons, Neal, of Grand Junction, who had been chair of the state board, resigned less than two years into her second term. Neal is a Republican, so Joyce was chosen by a 14 member Republican district vacancy committee from among nine interested individuals in 2015 to fill Neal’s seat until this 2016 election. If victorious, she will serve out the remaining four years of Neal’s original term. Joyce does have a Democratic opponent, Christine Pacheco-Koveleski, an attorney and former school board member from Pueblo. Joyce urged folks to go ahead and vote for Rankin twice on the November ballot. “It would all be legal,” she said. Joyce Rankin explained that the SBE guides the Colorado Department of Education (CDE) and sets rules and regulations pursuant to K-12 education related law established by the Colorado General Assembly (Legislature). She reported that the main duties of the seven member board (one member elected from each Colorado congressional district) are to hire a commissioner of education, approve the CDE budget request, and oversee pre-K through 12 public education, adult education, and the state’s public libraries. This year, the board has been largely focused on adapting the state education plan to fit with the new, federal Every Student Succeeds Act (Congress’ redo of the No Child Left Behind Act), reviewing the Reading to Ensure Academic Development (READ) Act passed by the state legislature in 2012, and student testing. In 2017, hiring a new commissioner of education and dealing with remediation (turnaround) of schools that have been in the lowest echelon of state evaluation for five or more years will be big SBE chores. In the Third CD, Pueblo has the most schools in the turnaround category. The SBE is obligated to pursue a turnaround for these schools. Rep. Rankin, who is a member of the Legislature’s six-person Joint Budget Committee, spoke largely about school funding and the parameters under which state revenue allocation must operate. He stated that Colorado has the most complicated school funding situation of any of the 50 states. A big piece of the picture is the “negative factor” which is subtracted from school districts after other legal sidebars are met—generally close to 13 percent, Rankin said. He indicated there was no relief in sight for the negative factor at the state level, but if a school district wants to try to make up the difference from what they would otherwise expect from the state, a mill levy override was the best option already in use by many districts. He explained this option as relying “on your own tax dollars and not having to send those dollars to the state for allocation.” In closing, Joyce Rankin urged participants to use her SBE website (www.joycerankinsbe.com), especially suggesting folks try the Citizenship Test she has posted there. She also noted that she and Rep. Rankin publish a monthly information column that can be used (and already is, by some) in local papers. The Rankins gave a similar presentation earlier on Tuesday to the monthly networking meeting held at CNCC in Rangely. In other Meeker School District news, at the BOE meeting last week, approved personnel hires included: Rene White, Ruthie Miguel, Kitti Piloni, Caleb Newkirk, Michelle Spieth and Natalie Harvey as classified / certified substitutes; Mary Washburn, Roberta Kinnamon and Michelle Spieth as food service workers; Kris Casey, Terrence Casias, Apryl and Caleb Newkirk as high school cross country volunteer coaches; Margie Joy as a HS volunteer volleyball coach; Brock Campbell as a HS volunteer football coach; Greg Chintala as middle school 2nd assistant football coach; and Chintala and Mike Dinwiddie as middle school basketball coaches.

We’ve got a squirrel (or two) living in the willow tree in our yard. Our upstairs window gives me a bird’s-eye view of squirrel world. Last week I watched Mr. or Mrs. Squirrel stuffing mouthfuls […]

By Emily Tracy Special to the Herald Times RBC I Who are the people of northwest Colorado? We are motivated, working to keep our rural and small town economies healthy, and striving to make it […]

The election of 2016, with all its flaming rhetoric, is behind us. We have elected the 45th president of the United States of America. May he be given all the wisdom, compassion and grace he […]