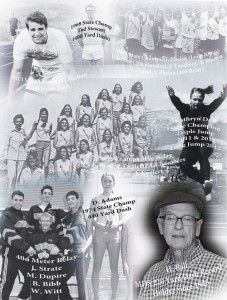 MEEKER I The annual Range Call Celebration is just around the corner and the Meeker Education Foundation is adding to the activities with a Save Our Track Walk-A-Thon.

The event will be July 5 from 7 to 11 a.m., and all proceeds will help fund the restoration of the Meeker High School track. This project is in progress, working on getting funding through community partnerships, grants and other fundraising efforts.
The walk-a-thon is a fun, unique way to help support the track programs. Organizers hope to see alumni involved as there have been several state champion tracksters from Meeker during the past 60 years.
One example is Harold Ball, who set a record in 1945 in the 110-yard dash that held for decades.
Ted Stewart was the 1968 state champion in the 440-yard dash.
And, of course, there was the memorable 1975 state championship team in the mile relay. That record-setting team was made up of Vicky Tate, Kathy King, Lori Englert and Annette Chambers.
In 1992 the Meeker High School girls won the team state championship with Jennifer Phelan winning the long jump, and she joined Lisa Sprod, Julie Vandiver and Amy Martin to win the 400-meter relay title.
In 1995, Jeannie Jansen won the 300-meter hurdle state championship, and, in 2011 and 2012, Kathryn Doll won the triple-jump championship. She was also the long jump champion in 2012.
Most recently T.J. Shelton won a championship in the 100-meter dash in 2013.
There are no doubt athletes and accomplishments unmentioned here who contributed a great deal to the success of the track teams through the years. Some members still contributing to Meeker athletic programs are coaches John Strate, who was a member of the 400-meter relay team along with Matt Dupire, Billy Bibb and W. Witt that went to state.
Also, junior high coach Heather Burke was an outstanding hurdler in high school and now has a program with more than 50 kids involved breaking records and building for the future of Meeker track.
Head football coach Shane Phelan was a standout track athlete in sprinting and jumping events. He continues to help with track on a volunteer basis.
Marki Cook took her successful track career to the next level as she ran for CSU-Pueblo, and her high school teammate Janae Kindall now coaches at Meeker High School as well.
The track was a dream of former superintendent Bob King. He made his dream a reality when the track was completed and Meeker hosted several meets.
Home meets bring people to town, promote the local economy and help build community pride.
The track, which has fallen into disrepair and is no longer sanctioned for inter-school meets, is one way the Meeker Education Foundation can work with the WRBM Recreation District to acquire grants designed for these types of projects, and help restore a track that would otherwise continue to be ignored.
The event, which will be a part of the Range Call events over the Fourth of July weekend, is going to be a great opportunity to get together, share old memories and run or walk together for a great cause.

RANGELY I New Eden Pregnancy Care Services of Rangely will hold its second annual Color Run/Walk 5K on July 5 for adventurous runners and walkers who want to have fun along the way.
Registration will begin at 8 a.m., with the race beginning at 9 a.m. at New Eden’s new location, 219 S. Sunset in Rangely. Cost is $15 per person or $55 for all immediate family members, and all participants will receive a T-shirt. Runners should be prepared to be doused with colored powders at various points throughout the stroller-friendly course.
To register early, pick up forms at the WRBM Recreation Center or at New Eden. All proceeds will benefit the pregnancy center. For more information, call Julie Noyes at 970-629-3711.

Listen to this post MEEKER I Now that the Meeker Range Call will have the Range Call Pageant with a lineup of directors and helpers, a rehearsal schedule has been set up.

Listen to this post Ethel Starbuck, 95, and Joe Sullivan, 93, took a brief stroll around the Rio Blanco County Courthouse lawn following Thursday’s annual Fourth of July Parade, which featured the two as grand […]