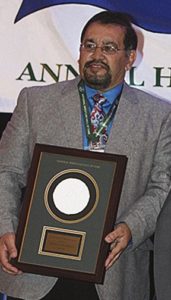 MEEKER I “It says a lot about Meeker’s wrestling program,” J.C. Watt said about the honors banquet, where Watt and four-time state champion T.J. Shelton were honored and Meeker High School alumni Roman Gutierrez was inducted into the Colorado Chapter of the National Wrestling Hall of Fame.

Watt was unable to attend the banquet but Shelton accepted the Colorado High School Coach of the Year 2A-3A for him. Watt, also a Meeker alumni, two-time state champion and a member of the 1990 championship team; coached Meeker to its eighth Colorado State Wrestling title, beating long-time nemesis Rocky Ford by one point. Watt also coached Shelton, Meeker’s first and Colorado’s 19th four-time state champion.
Shelton was honored as the Co-High School 2A/3A Wrestler of the Year, a honor he shared with four-time finalist and three-time state champion Bo Pipher of Paonia.
Shelton is a multi-sport athlete: an all-state football player, a 100-meter dash state champion and a three-time state runner-up, once in the 100- and twice in the 200-meter, as well as a four-time state wrestling champion, which was capped off with a team title his senior year.
Shelton is also an honors student, the senior class president and he will attend and wrestle at the Colorado School of Mines in Golden in the fall.
Gutierrez, a 1975 graduate of Meeker High School mentioned he never won an individual state title but he gave credit to his former coach, the late Bill Turner, for encouraging him to go out for the sport as a sophomore in high school and getting him into Western State College, where he went on to become a four-time national qualifier, two-time Rocky Mountain Athletic Conference champion and two-time NAIA All-American.
Gutierrez was inducted into the Colorado Chapter of the National Wrestling Hall of Fame, in Stillwater, Okla., with a Lifetime Service to Wrestling Award and in his acceptance speech, he was again grateful to his high school coach he said, “told me I would make a good teacher and coach, then after graduation he got me the job in Craig and well, the rest is history.”
Gutierrez made history by winning Moffat County’s first state team championship in 1985, followed by four more; 1994, 2001, 2002 and 2003. Gutierrez was named 3A and 4A Coach of the Year each of those years and Colorado Coach of the Year in 2002.
In 2001, the Bulldogs scored 3,084 team points, the most by a team in Colorado history, they also set the record with 531 individual wins, while his teams won 28 dual meets in 2001 and 2005, the most in state history. After 31 years at Moffat County, Gutierrez coached the Bulldogs to 15 league titles, 11 regional titles, five state titles, several top four finishes and 443 dual meets, the most by any coach in Colorado’s wrestling history.
Gutierrez thanked his family, including his wife, three daughters, seven of eight grandkids, brothers, sisters, former coaches and wrestlers who attended the banquet, along with his high school coach’s wife, Ann Turner.
“I’m glad Annie was here, because coach Turner was my hero,” Gutierrez said of the man, who was and continues to be a major influence on Meeker’s wrestling program.

MEEKER I For a 13th time in Meeker High School’s wrestling history, the Cowboys finished second in the Colorado state wrestling tournament last year and this year they return six wrestlers with state experience and […]