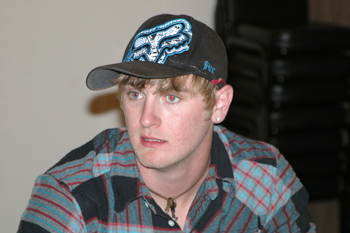 MEEKER I Former Cowboy basketball player Dakota Rowlett’s sports-playing days are over.
But after suffering serious neck and back injuries in a car accident Sept. 6 in Texas, the 2010 Meeker High School graduate is expected to walk again.
“They (doctors) said hopefully he will walk, but he won’t be playing any sports,” his mother, Aimee Rowlett, said Monday. “He has some nerve damage in certain areas, but they don’t foresee paralysis down the road. He has physical therapy to do and he will be in a neck and back brace for about three months. We’re just thankful he’s alive.”
Dakota was released from the hospital Monday in Nacogdoches, Texas, and will stay for now with his grandparents, who live in the same town.
“The day after his back surgery, they had him walking around the hospital,” his father, Stephen Rowlett, said. “It’s so far back to Meeker from here, there’s no way he would be able to take that kind of punishment.”
Dakota was driving a friend’s Volkswagen Beetle from Center to Nacogdoches, Texas, where he was attending college, when the accident occurred, the day after he celebrated his 19th birthday. He was about five miles from Nacogdoches at the time of the accident.
“He fell asleep, hit a culvert and had a multiple rollover. The car was set on cruise, so there wasn’t even a slowdown (before the accident), “ Aimee Rowlett said. “At first they thought he wasn’t wearing his seat belt. They didn’t think he had it on, because of the way the driver side (of the vehicle) looked. But he says he was wearing it. They told him, ‘You’re not getting a ticket if you weren’t.’”
Dakota, who was not ejected from the vehicle during the accident, underwent two surgeries on his neck on Sept. 6 and one on his back on Sept. 7.
“They did bone fusion with the bone donors,” his mother said. “They have pieced those in his neck and back and plated them.”
The college Dakota was attending — Stephen F. Austin State University — allowed him to withdraw from his classes, because of the accident.
“He’s going to transfer to UT (University of Texas) in Austin,” Aimee Rowlett said. “He will be going to a rehab facility in Austin. He will be undergoing a lot of therapy and we have a lot of family there (in Austin). We’ll keep a place in Meeker for the time being, but we’re going to rent a house there, my husband and I, until he (Dakota) gets better. Hopefully he will (start attending classes) next spring. If he has to get around in a wheelchair or take classes online, he’s determined to go.”
Aimee Rowlett was visiting her mother in Austin, when she received word about Dakota’s accident.
“He’s pretty upset (about the accident),” Aimee Rowlett said about Dakota. “But he’s very thankful. There are have been so many prayers, people calling and people Facebook-ing. It’s amazing how such a small community can have so many caring people.”
Dakota is expected start physical therapy in about a month.
“They will let him heal a little bit before they start pushing,” Aimee Rowlett said. “He’s started walking. He took a couple of steps the day before yesterday. Sitting up by himself is kind of hard, but he can stand. He’s doing really well considering.”
A benefit fund has been established at First National Bank of the Rockies.

Listen to this post RBC I There are several fall CNCC community education classes still open for registration.

Listen to this post RANGELY | School starts next week in Rangely, but the high school golf season has already begun and the Rangely varsity team will have already played in four tournaments before the […]

Listen to this post MEEKER | Lee and Emma Brown of Sterling are the proud parents of a baby girl, Rilynn Elizabeth Brown,

LIFEGUARD OF THE MONTH …

CNCC Corner: What does the CNCC Foundation do?