MEEKER – In what was initially investigated as possibly a human hand and foot, turned out to be bear paws. 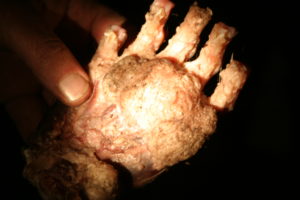 The body parts were discovered Thursday night in the grassy area between Mountain Valley Bank’s parking lot and the skateboard park, next to the library.
“We determined it was bear parts,” said Police Chief Bob Hervey. “The bone structure is different from the human (hand and foot).”
Two paws were found, one was a front paw, and the other was a back paw, Hervey said.
“It was definitely a bear paw,” said local taxidermist Bill Wille, who was asked to inspect the evidence. “I’ve done so many of them. In fact, we just skinned one not too long ago.
“This is about the third time over the years the police have called, just to confirm what they are looking at,” Wille continued. “It (a bear paw) looks kind of like a human hand.”
A passerby discovered the body parts and called authorities.
“A young man was walking by and saw them and called the dispatcher,” Hervey said.
Rio Blanco County Sheriff’s officers were also part of the investigation, which created a lot of buzz around town, as word spread about body parts being discovered in Meeker’s downtown district.
“Earlier (Friday) morning, I had a lot of people talking to me about it,” Hervey said. “It was big news.” 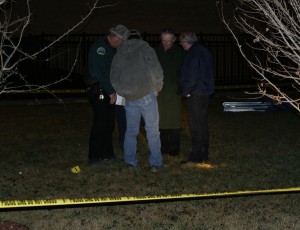 Dr. Albert Krueger and veterinarian Paul Neilson were called to the scene Thursday night to examine the body parts. Neilson took one of paws in an evidence bag to his clinic to take an X-ray, to determine whether it was a human body part, or from an animal.
“You can tell the difference, but I think they had their answer from the taxidermist, before (the X-ray) was done,” Neilson said.
Wille speculated the paws could have been left by another animal.
“It was probably picked up by a dog out of somebody’s garbage,” Wille said. “If it was Halloween, I could see (that it was a prank). But you would be surprised how many bears are out there in people’s freezers. I’m working on a bear now, and it had been in someone’s freezer.”
By the size of the paws, Wille said, they came from a younger bear.
“Looking at the size of the foot and all, it was a young bear, a small bear,” Wille said. “And it would be a black bear, not a grizzly.”