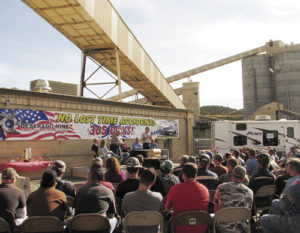 RANGELY I A celebration was held in front of the office building at Deserado Mine last Monday to honor the accomplishment of 365 days without a lost time accident.
More than 150 employees of Deserado Mine, board members of Deseret Power, and mine and safety officials attended.
“Our safety record begins with the support of top management, including the board of directors and works its way through our whole team of miners,” mine manager Al Hillard said of the accomplishment. “We have great people that not only look out for themselves but the other guy as well.”
The 365th day was Oct. 12. An average of 167 miners worked more than 300,000 hours in the underground mine, while producing 2.5 million raw tons of coal without a single reported lost time accident. This is the second time in Deserado Mine’s 29-year history to complete 365 days in a row, the last during the years of 2002-2003.
“Hopefully we’ve started something here, changing the culture,” Hillard said. “The most important thing we have is our employees and the safety of our staff and everyone that works at Deserado is our priority.”
Deserado Mine has an safety incentive program, giving away a four-wheeler each month in 2011, as mine employees continued on their safety record and culminated with the grand prize drawing for a 20 foot Puma travel trailer. Dennis Barker’s number was drawn as the winner of the travel trailer and Skyler Dixon was the final man standing in a ten-person match game to win this month’s four-wheeler.
An armored Loomis truck, accompanied by sheriff’s escort, delivered envelopes with $365 cash for each employee. They were promised more if they can celebrate another 365 days next year.
A new motto has been adopted at Deserado Mine: “At Deserado, we do it safe!”
Deserado Mine is located northeast of Rangely, is owned and operated by Deseret Power, based in South Jordan, Utah. Deseret operates the Bonanza Power Plant southeast of Vernal, Utah, which is the sole customer for Deserado’s coal.

Major progress is made as TANK takes new form

RANGELY I In September, the Friends of The TANK, Inc. took additional steps to turn the old water tank west of Rangely into a Center for Sonic Arts to be used for performance, recording and […]

RANGELY I With the final preparations well underway, the 2017 Rally Colorado Rangely Event is sure to draw much excitement as it bursts into town at the end of next week. The event, which is […]

RANGELY I All students will be assigned a locker in which to store their backpacks, coats, etc.