MEEKER I Talk about a leap of faith. Members of Meeker’s United Methodist Church broke ground Sunday for a new sanctuary.
Given the economic times, Johnny Arrington, the church’s pastor, said the building project is a sign of the congregation’s faith and commitment.
“It speaks volumes about the people, who are the church,” Arrington said. “They believe and trust what’s been put in their hearts. It’s like what I’ve been hearing people say, there’s no recession in God’s economy.”
Sunday’s groundbreaking was another step in the church’s ongoing building plan.
“We spent about a year moving through the capital campaign process,” Arrington said. “But it was a three- or four-year process from the first conversation to the groundbreaking.” 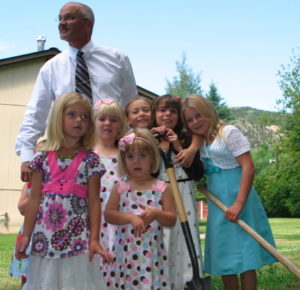 The church hopes to begin construction on the new sanctuary by the end of the month.
“We’re hoping by the end of July,” Arrington said. “It depends on permits. We’re cutting trees now, and we’ll start digging a hole. So we want to be as ready to start building as possible, but we don’t have a confirmed date.”
The project is expected to take about a year to finish.
“We’re hoping to be completed in a year to a year and three months, if all goes according to plan,” Arrington said.
The new sanctuary, to be built west of the existing sanctuary, will be bigger than the original structure, which had been added on to. The new sanctuary will have an entrance to the east and will be connected to Elbert Hall, which houses the church’s Sunday school rooms and other meeting space, as well as a kitchen.
“Ultimately, it will seat 180 and then have overflow seating,” Arrington said of the new sanctuary. “In the old one, you can get 90 to 100 in it comfortably.”
The original sanctuary was built in 1899.
“The church itself was established in 1893,” Arrington said. “It first started as a Sunday school in one of the buildings in Powell Park, and then it moved into town and met in different facilities. In 1899, they bought this property from the Oldland family, from what I understand, and it’s where we sit today.”
The future of the old sanctuary has not yet been determined.
“Our hopes are to find a home for it, like as a community chapel,” Arrington said. “That’s our hope. If not, it will be torn down.”
The old sanctuary served the church well for many years.
“It’s been a historical landmark in this community for 100-plus years,” Arrington said. “A lot of lives have been touched through the ministry of this church, provided for by this building.”

Nationwide, the average cost of school supplies for families with school age children this year will be $594.