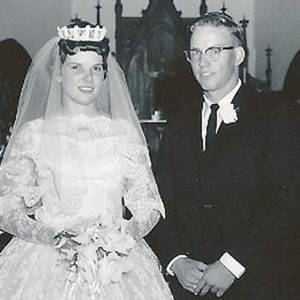 MEEKER I On Aug. 27, 1961, Jerry Seely and Mary Ann Conrado vowed to “have and to hold from this day forward, for better for worse, for richer or for poorer, in sickness and in health, to love and to cherish?” Nearly 50 years later everyone attending the July 23 celebration commemorating the event acknowledged the significance of their commitment to those promises. Joined by friends and family from across the country, Jerry and Mary Ann celebrated their 50th anniversary at their home in Meeker. More than 50 people joined them for the festivities and enjoyed a lamb barbecue coordinated by their son, Mike Seely.All of Mary Ann’s siblings — Peggy Shults, Brian Conrado, Joe Conrado and Kathy Mundy — attended. Jerry’s brother, Dan Seely, and sister, Beverly Burdick, also made it to the event. Additionally, all of their children — Tony, Mike, Doug and Carla — rallied from as far away as Europe.

Mary Ann’s sister Kathy read an original, heartfelt poem referencing back as far as their childhood and Kathy’s husband, Gary, recounted and reaffirmed the blessings of Jerry and Mary Ann’s marriage. Each of their children also recalled favorite memories and thanked them for the dedicated parenting that afforded each such wonderful life opportunities. Beginning with a lighthearted disclaimer about not being an expert on marriage, Mary Ann’s brother Brian, sister Peggy and Jerry’s brother Dan added the final comments on what a treasure Jerry and Mary Ann are as a couple. Finally, Jerry took the stage and emphasized what a central focus “family” had been throughout their lives and thanked everyone, not only for attending but for their significant role in the success and happiness of their family.Following the remarks, granddaughters Hadleigh, playing guitar, and Hannah, sang a touching version of Taylor Swift’s song, “Love Story.” A 15-minute video set to music by Elvis and other “really old” music rounded out the evening. Many of the attendees contributed photos for both the video and a scrapbook compiled by Kendra Seely, daughter of Doug and Kris Seely.The scrapbook, along with other family albums and Mary Ann’s remarkably preserved wedding dress, brought many smiles and a few tears as cherished memories bubbled to the surface. Daughter Carla Sullivan provided the beautiful cake and table setting, and coordinated the food and classic Colorado decorations. Wishing Jerry and Mary Ann many more years of joy and love in their marriage, we look to their commitment as inspiration for, and devotion to, our own families.

Listen to this post MEEKER | All current and former members of the Meeker Investment Group are invited to the annual luncheon Monday, May 13 at 11:15 a.m. at the Mexican House to celebrate the […]

Listen to this post RANGELY I Longtime Rangely residents Garry and Sandy Wright are this week’s “home of” honorees. The Wrights were married 50 years ago on Aug. 2, 1962. In the years that followed, […]